Hamsters infected with the coronavirus after first being injected with blood serum from recovered subjects were found to carry viral loads about 10 times lower.

Hong Kong scientists are using a blood serum from hamsters that have recovered from Covid-19 in experiments they say have significantly reduced the viral loads in other subjects.

The experiments have also shown that hamsters - which have enzyme receptors similar to those in humans - can recover from the coronavirus if they are strong enough to survive the first seven days after onset.

The findings come to light as Hong Kong faces a fresh wave of Covid-19 cases, with the tally of infected rising to 714 on Tuesday, with four fatalities. The virus has infected more than 771,000 worldwide and killed over 36,000.

Led by top microbiologist Professor Yuen Kwok-yung, researchers from the Department of Microbiology at the University of Hong Kong (HKU) began to use golden Syrian hamsters for testing in February, based on the high similarity between the "ACE2 protein" in hamsters and that in humans.

ACE2, or Angiotensin converting enzyme 2, is the host cell receptor responsible for the novel coronavirus.

Yuen's team determined the similarity between species when they saw that ACE2 in hamsters, as in humans, had a high binding affinity to the "spike protein" found in the coronavirus.

Forty-five hamsters were used in the test and the results were alarming, with severe damage to the lungs, trachea, immune system, and intestines emerging within the first seven days of infection.

But after the first week, a number of the hamsters began to recover."

At about day 4, the infection is so severe we can see lung damage and haemorrhaging - bleeding in the lung," Yuen said. "But by day 7, you can see the hamsters are recovering, with proliferation of normal lung cells. Their weight is being regained and antibodies are developing. It is very similar to humans, that most of our patients can recover."

The team then took some of the blood serum from the recovered hamsters, and injected it into a new subject, before then infecting the second hamster with the virus.

It was found that "the viral load inside the [second] hamster had decreased by one log [about 10 times]", according to Yuen. 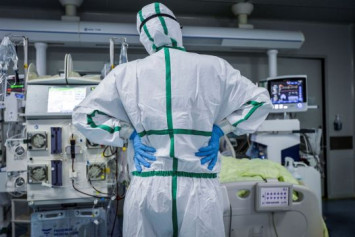 "If we do the same to humans, by injecting the blood plasma of recovered patients through the veins, it might really help them to recover by lowering the viral load inside their bodies," Yuen said, adding his team is now awaiting approval from the Medical Council's ethics committee before experimenting on human subjects.

The team also discovered that sick hamsters passed the virus on to healthy hamsters housed within the same cages.

"Both hamsters have viruses inside their bodies after a few days … This is the first time in the world that we showed that the Covid-19 virus can be transmitted in a cage setting, just like a human family," the microbiologist said.

Meanwhile, scientists around the world have been racing to develop a vaccine, and the first clinical trials could be held in China and the US within a month.

In China, scientists who earlier infected monkeys with the coronavirus that causes Covid-19 found that those that recovered developed effective immunity - a potentially important discovery.