Coronavirus: Hong Kong expert claims outbreak is now a pandemic and US death could be 'tip of the iceberg'

Professor Gabriel Leung believes the coronavirus can now be called a pandemic.

A top medical expert in Hong Kong believes the coronavirus epidemic can now be labelled a global pandemic, as it has spread quickly across several countries.

Professor Gabriel Leung, dean of the University of Hong Kong's (HKU) medical faculty, added the first death recorded in the United States was worrying, as it indicated there could be more confirmed cases in the country.

However, the World Health Organisation has stopped short of calling the outbreak a pandemic, with director general Tedros Adhanom Ghebreyesus saying health officials had not yet witnessed the "un-contained global spread", or "large-scale severe disease or death" associated with a pandemic.

But speaking on a radio show on Sunday, Leung said the death in the US could be "the tip of the iceberg".

"One death could mean there are 100 confirmed cases in the region - and maybe you haven't recorded as many cases just because you haven't tested enough people," he said.

Asked if the virus, which causes the Covid-19 disease was now a global pandemic, Leung said the only reason for not classifying it as such was maybe the word "triggers public fear".

"Technically this is a pandemic, as it is spreading locally in many countries … but the World Health Organisation insisted that it should only be called pandemic when local outbreaks get out of control," he said.

The contagious disease, which originated in China, has been spreading fast globally, with the US facing the latest outbreak, with one death reported on Saturday, and 62 infections.

Community outbreaks have also been seen in Europe, the Middle East, and Southeast Asia, with Italy and South Korea facing the biggest number of infections. 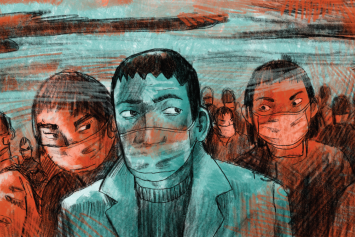 Leung also said that as the outbreak was being brought under control on the mainland, authorities must stay vigilant against a second wave, which could be caused by the resumption of work and industrial production.

The HKU head also said he had visited Britain recently, and health officials in the country praised Hong Kong for doing well in containing the virus.

"They said both Singapore and Hong Kong have been doing well, because the numbers of confirmed cases in the two places are similar," he said.

Hong Kong and Singapore have confirmed 95 and 96 cases respectively, so far.

"But Hong Kong's population is about a third larger than Singapore. So I think this is something we achieved with the effort of the whole society," he added.

But Professor David Hui Shu-cheong, a respiratory medicine expert from Chinese University, said the outbreak in Hong Kong could only be considered as under control if there were no new confirmed infections in 28 days.

"So far we have a few new cases every day," he said.

Meanwhile, the outbreak has forced the city to call off major events at the annual Bun Festival next month, a traditional Chinese fiesta which draws tens of thousands of local and overseas visitors to the outlying island of Cheung Chau every year. 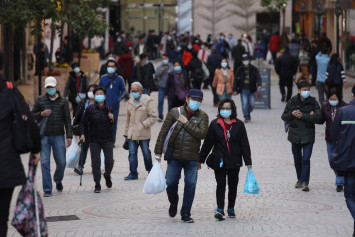 The festival traditionally features a bun scrambling contest, which requires contestants to climb 14 metres to the top of a bamboo tower and back down again.

Other highlights include the Piu Sik, or "floating colours" parade, a traditional Taoist ritual featuring children dressed in colourful costumes and balanced on "floating" platforms, that are carried around the island in the belief it will ward off wandering evil spirits.

The organisers of the rural festival announced on social media that both the contest, and the parade had been cancelled, but other smaller parades and Taoist rituals would take place.