People wearing protective masks, following an outbreak of coronavirus disease (Covid-19), rush to get in a bus in Manila, Philippines, March 12, 2020.

Frontline health care workers in the Philippines are growing increasingly concerned about a lack of personal protective equipment that they fear will expose them to the Covid-19 coronavirus.

As of Tuesday, the country had only reported 187 cases and 12 deaths, but with President Rodrigo Duterte this week putting the entirety of Metro Manila and mainland Luzon, home to at least 57 million people, into "community quarantine" until April 12, health workers are looking to their stocks of face masks, gloves, disposable gowns and face shields and finding them wanting.

"For now, we have a process and we are managing," said Jolysses Calunod, a nurse in Metro Manila, who nevertheless cautioned that "the care our hospital can provide is limited".

"In the event that a patient tests positive and has severe symptoms we have to coordinate the transfer of them to the department of health, to find an available hospital," he said.

"There is a lack of funding and precautionary measures and we can only eradicate this if more focus is put towards health equipment, staff, personal protective equipment and testing."

Calunod said he had personally experienced a "sudden rise" in suspected cases recently, but that most of the patients "were advised to return home, self-quarantine and take precautionary measures in preventing the spread of the contagious disease".

The Philippines is thought to have fewer than 2,000 kits to test for the Covid-19 virus - a number Health Assistant Secretary Rosario Vergeire revealed earlier this month.

The nation of more than 100 million people also has a doctor to patient ratio of just 1 to 33,000 and a general lack of hospital beds.

One doctor at a hospital in Manila who did not want to be named worried that "if the situation turns into what we saw in Italy, we will not have enough rooms for everyone in the community".

Her hospital has started making preparations for an expected influx of patients in the coming days by opening a triage area outside the building to reduce people's exposure to the virus. 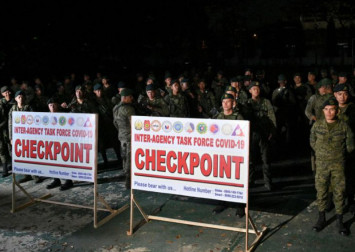 But she worries that the government is not doing enough in terms of trying to slow the spread of the outbreak.

"Government hospitals and health care professionals are begging on social media for personal protective equipment because our supplies are already out of stock," the doctor said. "At this rate, we will be left with no protection."

On Sunday, Philippine Vice-President Leni Robredo announced on Facebook that 12.3 million pesos (S$340,000) in donations had been raised to purchase more protective gear, with the first batch of 1,000 sets to be delivered to health workers on Monday.

Until recently, only 530 million pesos has been budgeted for the country's fight against the coronavirus. The department of health had petitioned Congress for 2 billion pesos more, but the House committee on appropriations said 1.65 billion pesos was the maximum amount of supplemental funds available.

In an address to the nation on Monday, Duterte stated that a further 27.1 billion pesos would be allocated to help frontline health care workers, as well as provide economic relief to people and sectors affected by the continuing outbreak-induced slowdown.