Coronavirus second wave: Which Asian countries are most at risk?

A new outbreak of the coronavirus in China has sent ripples of fear through the world of a second wave of infections, especially in countries that have had some success in controlling the pandemic and are moving ahead to reopen their battered economies.

Several Asian countries that have eased restrictions and resumed some level of economic activity, including Australia, Japan and South Korea, have in the last month reported new outbreaks numbering in the tens to a few dozens.

Capital cities have been the sites of most infections, partly due to their high human traffic. China’s second outbreak is centred in Beijing, with at least 184 new cases reported since last week, as authorities cancelled scores of domestic flights, banned outbound travel and imposed a partial lockdown.

On the prospect of dealing with the second wave of the coronavirus, experts generally agree that regional governments appear to be better prepared to cope after the substantive experience they have gathered tackling the initial outbreak of the pandemic.

However, analysts also point out that challenges remain, especially in maintaining vigilance and ensuring that small clusters are swiftly contained so they will not morph into bigger and more uncontrollable infections.

Paul Ananth Tambyah, president of the Asia-Pacific Society of Clinical Microbiology and Infection, said countries and communities most at risk of a second wave were those with ongoing cases of local transmission, with daily numbers in the hundreds or thousands.

“Although it could be argued that this is still the tail end of the first wave, there are likely to be multiple chains of transmission in those countries which have not been cut off,” Tambyah said.

Countries with high infections that Tambyah alluded to include India, which on Friday recorded the highest one-day spike of 13,586 coronavirus cases, raising the total to 380,532, the fourth highest in the world, after the United States, Brazil and Russia. Its death toll stood at 12,573. 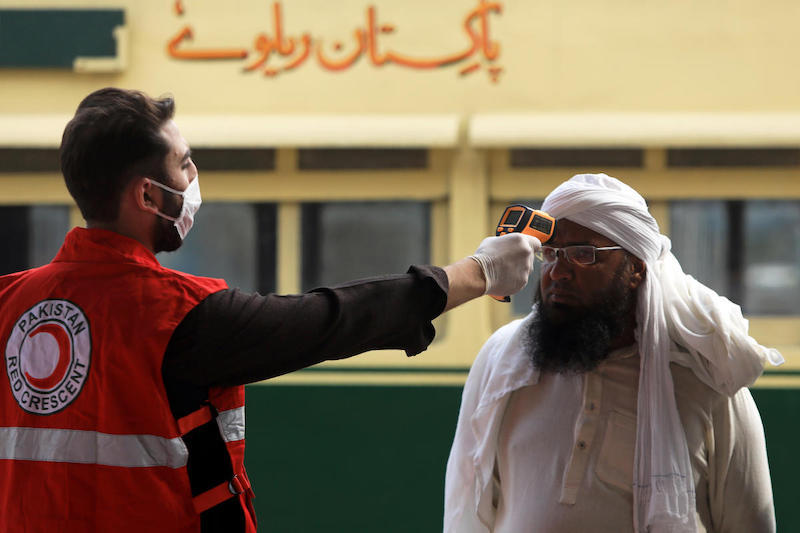 A worker checks a man’s temperature following an outbreak of Covid-19 at a railway station in Peshawar, Pakistan. Photo: Reuters

In neighbouring Pakistan, 136 more deaths were reported on Friday, bringing coronavirus-related fatalities to 3,229 and overall infections to 165,062.

In Indonesia, the country has boosted sample testing to meet President Joko Widodo ’s target of 20,000 per day. The country reported 1,331 new coronavirus infections on Thursday, its biggest daily increase since the outbreak started locally, bringing the total number of cases to 42,762. Fatalities stood at 2,339.

In the clearest sign that the pandemic is here to stay, countries that have overcome the first wave are now gearing up to stem the emergence of a second wave.

South Korea added 49 new cases on Friday, including 32 local infections, raising the total caseload to 12,306, according to the Korea Centres for Disease Control and Prevention.

The number of new daily Covid-19 cases marks a slight slowdown from a three-week high of 59 a day earlier. Of the locally transmitted cases, 26 were reported in densely populated Seoul and nearby metropolitan areas. 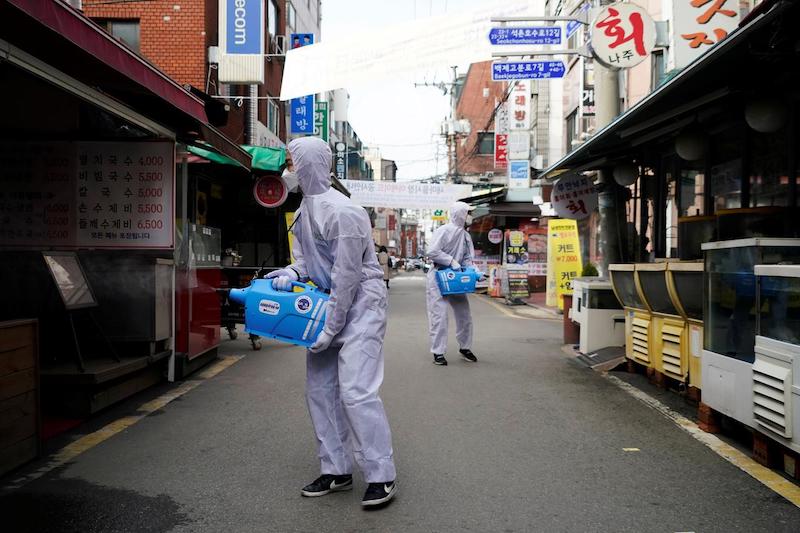 Lee Hoan-jong, Emeritus Professor at the Seoul National University Children’s Hospital, said it was inevitable for the virus to spread wider and faster, after the country eased social distancing about a month earlier.

“A second wave of infections can come at any time until a vaccine becomes widely available or some 60 per cent of people get infected” to have herd immunity, Lee said.

Health authorities said the country had to brace itself for yet more cluster infections in the greater Seoul and other areas, and warned that the pandemic’s spread might stretch into summer.

National Cancer Centre’s Epidemiology Professor Ki Moran said at a seminar last week that the country “must tighten social distancing, otherwise, we may have 800 new cases every day in a month’s time”.

Also worrisome is the situation in Japan, where health experts say there is a high likelihood of a second wave of the coronavirus hitting the country.

Officials in Tokyo confirmed 41 new coronavirus infections on Thursday, marking the third time in the week that the capital logged more than 40 cases in a day. This brings the total cases in Tokyo to 5,674.

According to Kazuhiro Tateda, president of the Japan Association of Infectious Diseases (JAID) and a member of the committee set up by the government to combat the spread of the virus, many of the recent cases in Tokyo can be traced back to the city’s nightlife districts.

Tateda said that even though these clusters were easier to control as they were linked to traceable parts of the city, there was always the risk of more localised outbreaks. 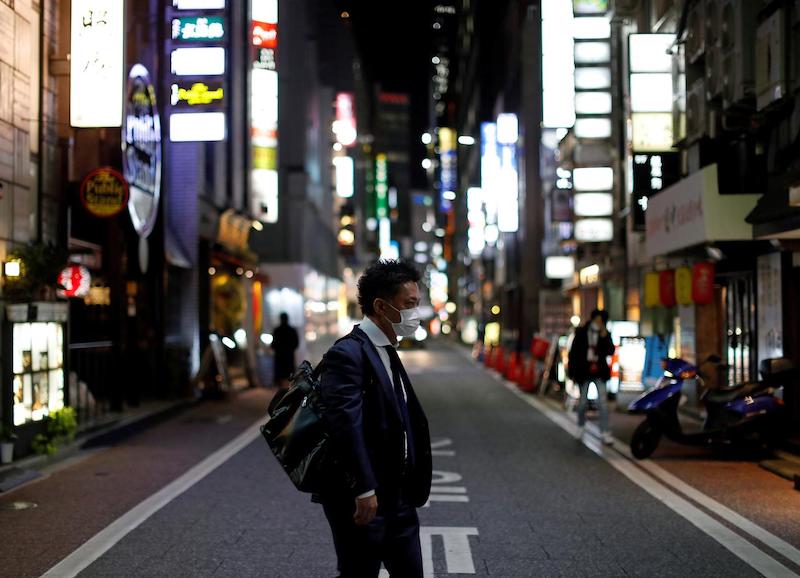 To guard against a second wave, authorities have drawn up a series of guidelines that the nightlife industry is being encouraged to abide by.

However, Yoko Tsukamoto, a professor of infection control at the Health Sciences University of Hokkaido, said it was hard for businesses to follow the rules as staff needed to be close to customers to serve them drinks or light their cigarettes.

“It’s not realistic to expect them to keep two metres apart, so the government is stuck between doing what it has done and shutting these businesses down,” she said.

She said authorities might have no choice but to reimpose a state of emergency on Tokyo if cases rose to 100 a day.

JAID’s Tateda was confident that if that were to happen, the government, health care professionals and the Japanese public would be better prepared and react far more swiftly.

“We have gained a lot of experience in what to do and what not to do,” he said. “We will respond more quickly and more effectively and apply the lessons that we have learned.

“The government has increased the budget to fight the disease and doctors and nurses are better prepared to deal with the virus. They are as ready as they can be if a second wave does come.”

Things are also not looking well down under in Australia, where dozens of new cases were recorded in the past week, the majority from Victoria.

On Wednesday, the state recorded its biggest single-day increase in more than a month with 21 new cases, prompting Victoria Premier Daniel Andrews to warn that the pandemic was “far from over”. Another 13 cases were added to Victoria’s total on Friday, bringing the total to 1,792. Australia has 7,409 cases overall.

But as to what this second wave of the virus would look like, many experts were uncertain.

Michael Baker, Professor of Public Health at the University of Otago in Wellington, said the term “second wave” dated back to the 1918 influenza pandemic, which had three distinct waves in some parts of the world, with the second generally being the most severe.

He said the likelihood of a second wave would vary depending on the strategies countries used.

“New Zealand, for example, came out of a lockdown very cautiously into a virus-free country, so there were no cases that could start a fresh outbreak,” Baker said.

“Several other countries in Asia are also containing this virus in a similar way, so [we] will not expect to see many cases as they reduce their lockdowns.” 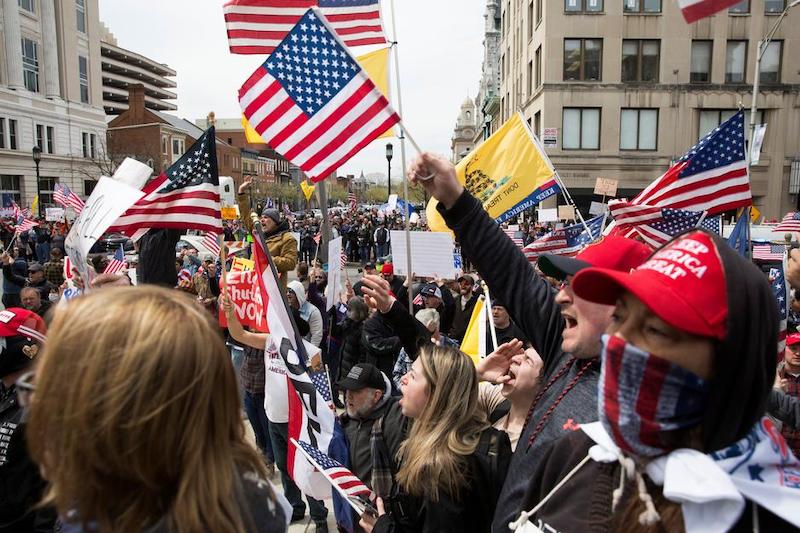 Demonstrators gather to protest against the state's extended stay-at-home order to help slow the spread of the coronavirus disease. PHOTO: Reuters

By contrast, in the US, several states coming out of lockdown were experiencing large rises in cases because there was still a lot of virus circulating that could start new chains of transmission, Baker said.

On what lessons Asia could learn from its first round of tackling the pandemic, Baker pointed to the importance of face masks for reducing transmission, as well as “the need for testing and high-performing contact tracing systems”.

Equally important, according to Baker, was “good science, good leadership, and responding rapidly to the pandemic. The containment and elimination approach developed during the Sars era also works for Covid-19”.

Beijing, which was one of the worst-hit during Sars, has adopted stricter measures in its second phase of dealing with Covid-19, such as installing 24-hour security checkpoints in local communities, closing schools and advising people to step up on social distancing.

Baker said the risk of imported cases starting fresh outbreaks would remain the main threat to China, where a swift and vigorous response would be needed to contain the outbreak.

“[The response] is highly likely to be successful, given China’s demonstrated experience with such control measures,” Baker noted. 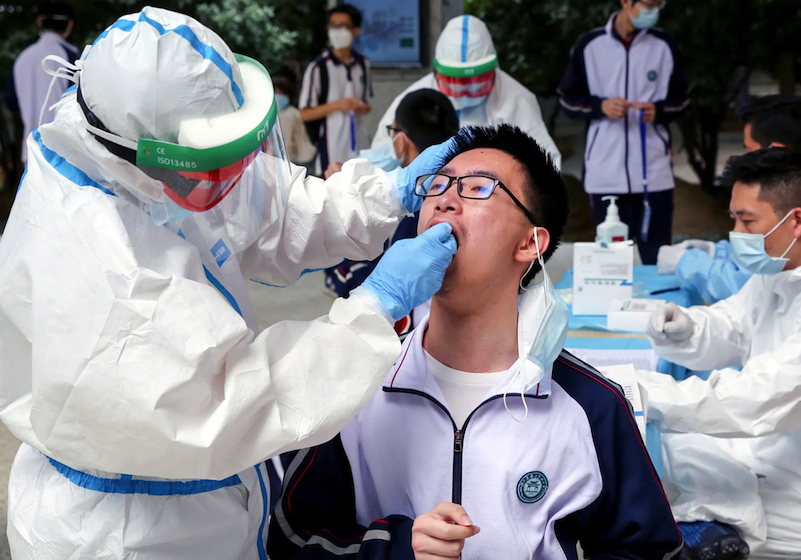 Zhang Qiang, deputy head of Beijing’s epidemic control team, said at a midweek briefing that Beijing had expanded mass testing among its residents, covering all who have been to, or had close contact with, key food markets which have been shut down. Health workers have tested some 356,000 people since June 13.

However, some Beijing residents are still finding it difficult to get tested. Fu Linshan, a web developer, said he needed to get the test done and obtain an all-clear before he was allowed to return to work.

“But when I arrived at the hospital early in the morning, all the tokens for test appointments had already been snapped up,” Fu said.

Wu Zhiwei, Professor and Director of the Centre for Public Health Research at the Medical School of Nanjing University, maintained that Beijing’s medical resources and prevention and control efforts were adequate in meeting the second round of outbreak, as the capital had maintained “a heightened state of alert” since the first.

On the national level, Wu said that although the probability of infections was not high, the country should still remain vigilant.

“With life returning to normal in some cities and the increase in human contact, the possibility of small-scale clusters is very real.

“If these are not quickly discovered, this might lead to large-scale community and even regional infections,” Wu said.

On what could be done when the second wave hits, Tambyah said: “The key is rapid identification of cases, testing those who are at risk while maintaining good sentinel surveillance. Once cases are identified, good contact tracing and isolation and quarantine as appropriate.”

Adding that the health care system in the region was better prepared for a second onslaught, Tambyah said: “We do know a lot more about the virus, so I think that this will be containable.”