Instead of tarpaulins being laid out in the parks of Tokyo in anticipation of the arrival of the first cherry blossoms, crash barriers are being erected with signs warning that the annual revelries are prohibited as a result of the coronavirus pandemic.

The Tokyo Metropolitan Government has announced that parks that are usually the focus of springtime celebrations throughout the city are open for people to walk through, but there will be no partying beneath the blossoms this year.

Workmen were putting up fencing and signs at Ueno Park on Tuesday (March 8), with a message on the metropolitan government’s website stating that “In order to prevent the spread of the new coronavirus infection , eating and drinking on sheets spread out is prohibited during the cherry blossom season.

“Even if you look at the cherry blossoms while walking, please take measures to prevent infection, such as wearing a mask and avoiding congestion,” it added. “We apologise for the inconvenience and thank you for your understanding and cooperation.”

Despite a decline in the number of new infections and the roll-out – albeit slowly – of the nationwide vaccination programme , the Japanese government on Saturday (March 6) extended the state of emergency for Tokyo and the three surrounding prefectures for a further two weeks.

There were 116 new cases of the virus reported in Tokyo on Monday, down from 237 the previous day and from an average of nearly 393 cases per day for the month of February. The single-day high in Tokyo was recorded on Jan 7, with 2,447 cases.

A number of the capital’s most popular parks, including Shinjuku Gyoen, Hamarikyu Gardens and Rikugien, have been closed to the public since the state of emergency was declared, but other green spaces that are subject to the ban on celebrations include Yoyogi Park, Hibiya Park and Inokashira Park.

In its latest prediction, the Japan Meteorological Agency has declared that the cherry trees in Tokyo will bloom on March 15, a full 11 days earlier than last year after the capital’s mild winter. The peak day for admiring the short-lived spectacle of the blossoms has been estimated at March 23.

The first to bloom will be the “somei yoshino” variety of cherry blossom, which is so pale that it is almost white, followed by the “shidarezakura” and finally the deeper pink of the “yaezakura”. 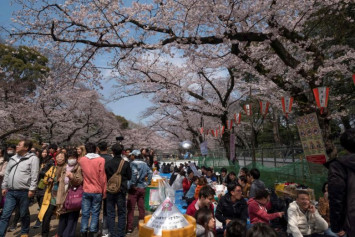 “It’s a real pity as I was looking forward to being able to meet up with some of my friends again,” said Issei Izawa, a 21-year-old university student from Yokohama. “We have all had lectures online since this time last year and it has been difficult for all of us to get together, so we had set cherry blossom season for a sort-of reunion.

“But I do understand,” he added. “I do not want to get the virus and potentially share it with my family, so this is probably the best decision. We are all just looking forward to this situation being over and now we have set the summer for our reunion.”

Cherry blossom season is also typically a highlight for foreign tourists, but the closure of Japan’s borders because of concerns over new strains of the virus means there are no travellers to enjoy the blossoms this year.