Could Myanmar's ethnic armed groups turn the tide against the junta, with a little help from Beijing?

After weeks of silence as Myanmar ’s military cracked down on civilians protesting against the Feb 1 coup, the Arakan Army (AA), a major player among the country’s more than two dozen ethnic armed groups, this week announced it was on the side of the people.

“The current actions by the Burmese army and police are very cruel and unacceptable,” AA spokesman Khine Thu Khahe said on Tuesday (March 23), adding that “the oppressed ethnic people as a whole will continue to fight for their freedom from oppression”.

‘They are shooting at our kids’ heads’: in Myanmar, a dead 17-year-old’s family mourns the loss of hope

The AA’s statement was significant, as it comes just weeks after Myanmar’s junta removed the militia from its list of terrorist groups as a means of establishing peace across the nation of 55 million.

The AA, in seeking greater autonomy for the western Rakhine State – which is home to the Rohingya Muslim ethnic minority group – has battled against army troops since 2018.

Myanmar’s ethnic minority groups – which make up about one-third of the population – have increasingly put aside their differences to condemn the coup, putting further pressure on military resources that are already stretched thin as they take on protesters.

The Restoration Council of Shan State/Shan State Army - South (RCSS) on Saturday (March 27) became the latest such group to denounce the coup, with its chair General Yawd Serk saying Myanmar’s ethnic armed groups will not stand by and do nothing if the military junta’s forces continue to kill protesters.

At least 16 civilians were killed by security forces across Myanmar on Saturday, according to local media and witnesses, as the junta celebrated the annual Armed Forces Day.

“The Myanmar Armed Forces Day isn’t an armed forces day, it’s more like the day they killed people,” Yawd Serk said. “It isn’t for the protection of democracy as well, it’s how they harm democracy ... If they continue to shoot at protesters and bully the people, I think all the ethnic groups would not just stand by and do nothing.”

Addressing a military parade earlier, junta leader Min Aung Hlaing said the army’s job was to protect the people and promote democracy, reiterating his promise of a fresh election made after the army took power on Feb. 1.

The latest fatalities would bring the total death toll to more than 340 in the army’s efforts to stamp out the widespread opposition to the coup.

Many protesters are calling for the formation of a federal army, and Yawd Serk said he supported that. “The ethnic armed groups now have a similar enemy and we need to join hands and hurt those that are hurting the people. We need to join together,” he said.

As rallies continued, the World Bank on Friday warned that the country’s economy could slump 10 per cent this year due to the daily strikes and military action. 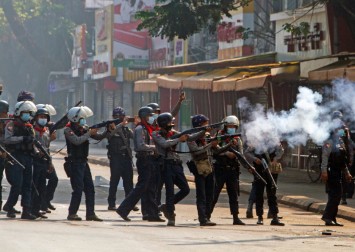 This week, dozens of civil society organisations, especially those from the western Rakhine State, decried the coup and called for an end to the violence that has filled the streets of Myanmar’s largest cities since the democratically elected government of Aung San Suu Kyi was brought down.

Nehginpao Kipgen, associate professor and executive director of the Centre for Southeast Asian Studies at the Jindal School of International Affairs in India, said if Myanmar’s ethnic armed groups were united, they could be a “formidable force” against the military, known locally as the Tatmadaw, which has a force strength of around 350,000.

However, the groups had fallen prey to the military’s “divide and defeat” strategy, he said, referring to how some of them had thrown their lot in with the army due to grievances with Suu Kyi’s ruling National League for Democracy (NLD).

Cutting the NLD down to size

For instance, the Arakan National Party (ANP) saw the coup as an opportunity to cut the NLD government down to size, even though the military had brutally suppressed an ethnic Arakanese insurgency, displacing tens of thousands of Arakanese civilians, the ANP’s core constituency.

“The NLD is the biggest political competitor dominating the south of Rakhine state, which is more mixed ethnically,” said Philipp Annawitt, who served as an adviser to Myanmar’s parliaments and government from 2015 to 2021. “This was a chance [for the ANP] to get rid of them and establish control of all of Rakhine State for good.”

Annawitt said the junta had offered the ANP – Myanmar’s fourth-largest party, which dominates Rakhine state – seats on the central and state governments.

“[The ANP] is also negotiating the post of chief minister, which the NLD never granted them. I also assume the junta offered them more autonomy and greater control over local resources,” he said.

During last year’s elections, voting in several constituencies in Rakhine was cancelled due to security reasons. “Despite that, the ANP performed quite well in areas where elections were held, in a sign of strong rejection of the NLD,” said Kipgen of the Centre for Southeast Asian Studies. 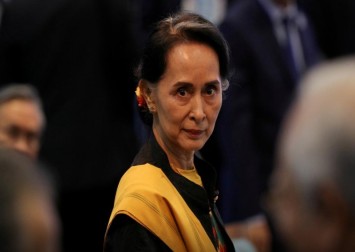 Tom Fawthrop, a journalist and filmmaker who has covered Myanmar since 2002, said the ANP saw little difference between the NLD and the military because NLD leader Suu Kyi had once exhorted the armed forces to “crush the Arakan rebels”.

“They have never forgiven the NLD for ignoring the problems of Rakhine state,” Fawthrop said.

Shane Brady, co-founder of campaign group Democracy for Burma, said the military wanted to cooperate with the AA to free up resources in Rakhine so they could focus on crushing resistance to the coup elsewhere in the country.

As for the Mon Unity Party (MUP), which is headquartered in southern Mon State, its party leader has openly said that people belonging to ethnic minority groups need to protect themselves from harm by siding with the stronger side in the conflict. “They were surely also offered much the same as in Rakhine,” former adviser Annawitt said.

Kipgen added that some ethnic groups saw Suu Kyi “as another authoritarian leader under a majoritarian rule” and the NLD as ineffective for failing to make significant progress on their demands, which range from equal rights to the cessation of conflict with ethnic armed groups.

The NLD was only able to get two such groups to sign a nationwide ceasefire agreement, whereas the previous military-backed Union Solidarity Development Party (USDP) government was able to get eight of them to sign.

Asean has options to tackle Myanmar’s crisis. Now can it muster the will?

The Karen National Union (KNU), one of the largest ethnic armed groups, is now supporting the interim government in Myanmar that has been established by NLD members and lawmakers who have not been arrested. Annawitt said the group appeared unlikely to change tack as opposition to the coup was particularly strong in the Karen community.

Fawthrop said ethnic armed groups were also playing a crucial role by providing a safe haven to the many ousted NLD parliamentarians who were now in hiding, many of whom had developed “a new-found appreciation for ethnic forces”.

Should the NLD return to power in the future, these groups could play a bigger role in shaping “a new Myanmar based on federalism”, the journalist noted.

Before the coup, ethnic parties had long called for the abolition of the 2008 constitution that guaranteed the military 25 per cent of seats in parliament, and for establishing a federalist system that would give ethnic minority groups greater political power.

Brady of Democracy for Burma said it was important for the NLD and the anti-coup civil disobedience movement to demonstrate a willingness to move in the direction of federalism “so as to keep the ethnic armed groups on board”.

He added that if the AA were to stop cooperating with the junta, this might well lead to the defeat of the military, as their forces would be stretched across the Rakhine front.

Annawitt, the former adviser, said China actually held “enormous sway” over the role that ethnic political and armed groups in Myanmar played in the current crisis.

Several of them receive support from Beijing, a legacy of China’s backing of the Communist Party of Burma in the 1960s and Beijing’s belief it has legitimate interests and a role to play in certain regions due to its geographical proximity to the Southeast Asian country.

These groups include the United Wa State Army (UWSA) operating in Wa State – an autonomous region within northern Shan State, which borders China – and, to a much lesser degree, the Kachin Independence Army (KIA).

Brady said the UWSA, the largest ethnic armed group in the country, was equipped with highly sophisticated weaponry provided by China, including man-portable air defence systems, or MANPADS, which are missiles that pose a real threat to the Myanmar military.

“If the UWSA enters the conflict on the side of the democratic resistance, things could go bad for the junta quickly,” Annawitt said.

‘You don’t dislodge people with guns by shouting at them’: quiet talks offer best hope for end to Myanmar violence, say Asean scholars. 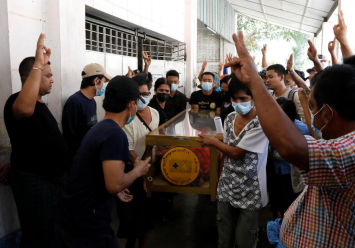 Kipgen pointed out that the UWSA was the armed wing of the United Wa State Party, which administered the state largely free from government control, and which mainly demanded a full state within Shan State.

Beijing was also said to be providing support to other ethnic armed groups, including the KIA, Brady noted, adding that it was too soon to determine whether China would become involved in the Myanmar crisis in such a way that it would be considered a proxy conflict.

While Beijing would back the party that it believed would most likely bring stability to Myanmar, and even though the military appeared to have a degree of control right now, Brady said China was likely to switch sides if the Southeast Asian country “continues its descent into chaos, damaging Chinese economic interests and leading to influxes of refugees to China”.

Said Annawitt: “If China stays on the sidelines, where I believe they are now, the opposition has a good chance of winning this.”

He added that China’s best option was to reach out to the opposition government and receive guarantees for its economic interests in the country.

“The junta is an unreliable partner that has switched [off its alliance to] China in the past and is deeply unpopular both at home and with Beijing. They have also made a mess of governing the country so far, turning Yangon’s industrial zones into a war zone, and driving away investors. If the junta falls, Beijing does not want to be there right beside it.”