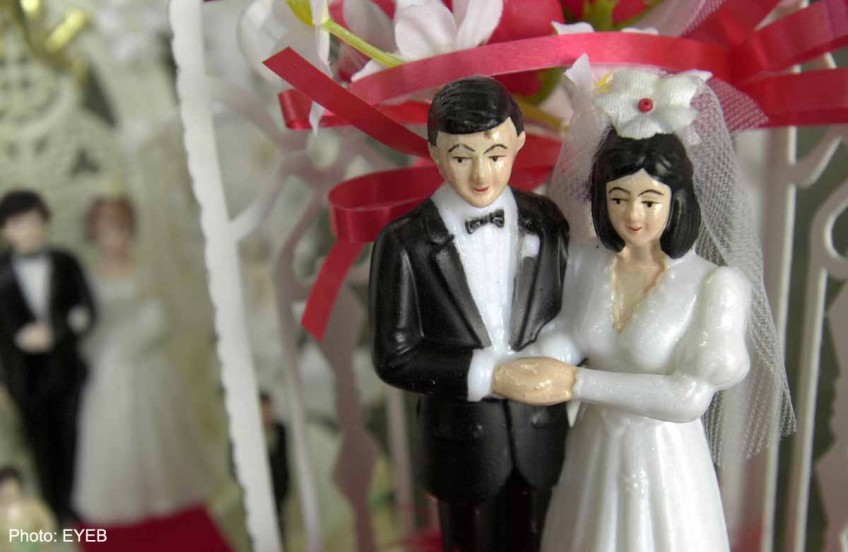 An increased number of divorced couples remarried each other in Shanghai last year, a trend that property experts say is a consequence of tax changes that led to a flurry of so-called "fake divorces" the previous year.

In March 2013, the State Council announced that those who owned more than one apartment would in future have to pay 20 per cent tax on the capital gains when they sold the second home, rather than the previous 1 to 2 per cent. The rule was introduced to control rising house prices.

Couples owning two properties can avoid paying the higher tax if they split up, with each owning only one property after the divorce. They can then sell one of the properties before remarrying. The loophole triggered an avalanche of divorce cases in many cities nationwide.

Shanghai's Civil Affairs Department revealed on Wednesday that 17,286 divorced couples retied the knot last year, up 17.4 per cent on the previous year.

This was a continuation of a sharp rise in 2013, when 14,730 couples remarried each other in the city - a surge of 82.6 per cent year-on-year There have been similar increases in other cities, including Nanjing in Jiangsu province, industry professionals said, as residents remarried after taking advantage of the loophole.

"It's common to see couples in Shanghai bringing along their parents and children and waiting outside the civil affairs stations to file for divorce, as if the entire family is attending a joyful event," Ming Li, deputy director of the China Marriage and Family Counseling Center, said on Thursday.

"You should not play at the law or treat marriage as a trade. The extraordinary surge in the remarriage rate shows that a large proportion of those who divorced did so in the fake way, though for sure some people realise that their ex-husband or ex-wife is actually their true love."

Ming said she expects the number of people remarrying to continue to rise in 2015 and 2016.

Song Jian, a lawyer at the Beijing King and Bond Law Firm, said there is no such thing as a "fake divorce" in a legal sense.

"Once a couple divorce, their relationship is not protected by law," he said. "Some may use a "fake divorce" as a way of getting rid of their spouse so they can be with new partners."

"If a policy leads to people doing something illegal or against society's values, it is not a good one," he said.

The Shanghai figures are included in a report on marriage. The Civil Affairs Department said loss of affection and incompatibility were the most common reasons given for divorces filed in 2014.

The largest number of divorces - nearly 40 per cent of the total - involved spouses aged between 30 and 40.

A total of 53,244 couples divorced in Shanghai last year, making it one of the country's midrange cities in terms of the number of marriage splits.

The department said the average age at which men married in the city increased to 34.43 in 2014, while for women it rose to 32.

A total of 1,962 marriages involved expats, overseas Chinese or residents of Hong Kong, Macao and Taiwan, a year-on-year drop of 4.5 per cent.