Sunset at Bali’s Echo Beach in Canggu. The resort island has been hit by a lack of international tourism.

Juwita* thought she had met “the one” when she encountered Tio* on Facebook’s Messenger app in 2019.

Then aged 16 and a secondary school student in Denpasar, the capital of Indonesia’s resort island of Bali, Juwita spent much of her time online.

She thought Tio, 20, sounded warm and caring and after exchanging hundreds of messages over the course of a few weeks, they finally agreed to meet up, spending hours together at tourism hotspots around Bali.

Then, Tio began asking Juwita to live with him in a small rented room in Denpasar. At first, the teenager declined, saying she was still schooling and her parents would be upset.

“But he was angry and threatened me. I was so scared that he would leave me so I stayed with him,” Juwita said.

Soon, the couple ran out of money to pay rent and buy food. And it was then that Tio came up with the idea of setting up an account on Singapore-based messaging app Michat. The app allows people to communicate with strangers and Tio suggested Juwita offer prostitution services, which are illegal in Indonesia.

Juwita refused at first but gave in when her father, the family’s sole breadwinner, lost his job as a tour guide during the Covid-19 pandemic.

Tio put a price tag of 500,000 Indonesian rupiah (S$47) per hour with Juwita, and within a day, she was having sex with as many as eight strangers. All the money she earned was taken by Tio. After a few weeks being held captive, the youngster managed to run away when the room was left unlocked.

“I was his walking ATM,” Juwita said. “This wasn’t a relationship I wanted to be involved in.”

Juwita’s experience is far from unique. Indonesia’s Ministry of Women Empowerment and Child Protection (KPPPA) recorded a sharp increase in human trafficking cases during the pandemic with 256 victims in 2021, compared to 213 in 2020 and 111 in 2019.

Child exploitation, including the use of minors in criminal activities and hazardous work, is also on the rise, with more than 165 cases reported in 2021 – up from 133 in 2020 and 106 in 2019, with most victims from the West Java and East Nusa Tenggara provinces.

According to the most recently-available figures from the Global Slavery Index by Australian NGO Walk Free, an estimated 1.2 million Indonesians were enslaved in 2016.

Many were trafficked for domestic work at home and abroad or exploited in the sex trade. Around 43 per cent of Indonesia’s trafficking victims are said to be aged 14-17.

Experts believe that the number of children being trafficked and exploited in the country is much higher as many cases go unreported.

The US State Department’s Trafficking in Persons (TIP) Report this year said Indonesia “does not fully meet the minimum standards for the elimination of trafficking but is making significant efforts to do so”.

Getting a case to court does not happen that often. In 2019, according to the TIP report, Indonesia’s police arrested 132 individuals for alleged sex trafficking. They then initiated 102 investigations, compared with 95 in 2018 and 123 in 2017. Yet, only 26 cases were handed to the attorney-general in 2019.

And even when cases do make it to court, the outcome is often less than satisfactory for victims.

Human trafficking is a serious crime in Indonesia with a maximum sentence of 15 years in prison. But on average, offenders only spend about three years in prison, according to the head of Bali’s Women’s Legal Aid, Ni Luh Putu Nilawati.

“The problem with our legal system is that it is hard to prove whether such cases can be regarded as human trafficking,” she said, adding that the legal definition should also include transporting, harbouring or “receipt” of people as well as fraud and coercion.

And she pointed out that if the victims are children “sometimes the perpetrators can only be charged under the Child Protection law, not the Anti-Trafficking Law”.

With just under half of Bali’s 328,000 tourism workers losing their jobs due to the pandemic, there has been a rise in people using instant messaging apps like MiChat to engage in online prostitution as a means of earning a living, said Ibnu Dwi Cahyo, a researcher at Indonesia’s Communication and Information System Security Research Centre.

Cahyo said with online prostitution on the rise, sex traffickers had “co-opted” instant messaging apps, as the authorities could not track conversations there.

Between 2019 and 2021, the KPPPA recorded five trafficking cases in Bali, an island of four million, involving 10 victims, some of them children. Yet only three cases made it to court.

However, Nilawati said her foundation had actually helped 17 trafficking victims in Bali between 2016-2018 and that was “the tip of the iceberg”.

She said that as trafficking occurs behind closed doors it is difficult for police to track due to personnel and budget limitations and most cases, in cafes, spas, and hotels, cannot be investigated and prosecuted without reports from the public or the victim/s coming forward. 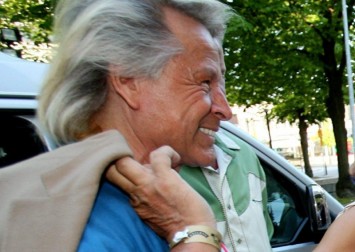 Nilawati added that around 26 trafficking victims were rescued from a Bali cafe in 2016, highlighting the island’s attraction as a place to come and work among the millions of foreign tourists a year visiting before the pandemic.

Another problem to contend with is the fact that often families do not report trafficking cases to the police. “It’s not rare for some cases to be settled outside the legal system for a certain amount of money,” said Nilawati, referring to the practice of perpetrators resorting to out-of-court settlements with victims’ families.

Cahyo said eradicating online prostitution could not be done by simply banning apps, saying that was counterproductive and a waste of time and money as people would seek other alternatives.

“We should not blame apps. It’s a socio-economic problem. So the only way out is by addressing the roots of the problem [such as prostitution], not by blocking apps.”