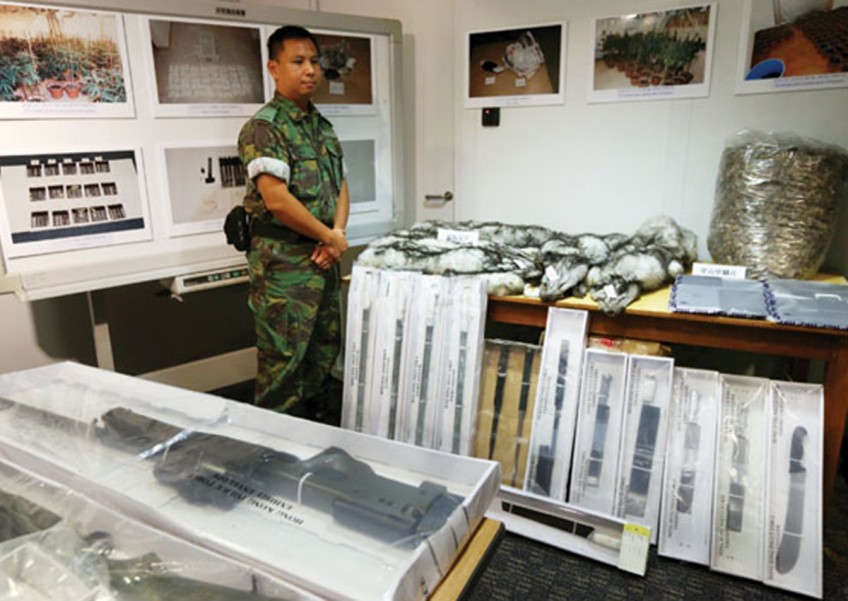 Weapons and other contraband goods were displayed during a news conference on operation "Thunderbolt 15".
China Daily/ANN

Police have apprehended more than 19,000 suspects in a three-month cross-border anti-triad operation in Hong Kong, Macao and Guangdong province.

Law enforcement officers from the three places are expected to take inter-force co-operation to new heights following the success of the longest joint operation of its kind.

In Hong Kong, a total of 4,343 people - including 1,177 from the mainland - were rounded up after more than 7,500 places including vice dens, gambling venues and residential flats were searched. Officers confiscated about HK$102 million (S$18.7 million) in cash, HK$67 million worth of illegal drugs, weapons, pirated DVDs and contraband cigarettes.

Illegal loan businesses were found to be a new income source of local triads, said Au.

Five major undercover actions were carried out during the operation from June to September, he said.

The arrests were mainly members of triads from Hong Kong and the mainland - including some high-ranking ones, Au revealed.

"The message we want to send out to the public is that police have 'zero tolerance' for organised crimes and any other illegal activities," Au said.

On the other side of the border, mainland police arrested 11,339 suspects - along with 31,651 drug addicts - in Guangdong province during the operation.

A new trend showed triads from Hong Kong and Macao change tactics and make forays into the mainland. This is to seek co-operation and plan criminal activities, a Guangdong police spokesman explained.

He also pledged that they will launch another joint operation soon with Hong Kong police, who are confronting the current surge in phone scams.

According to Guangdong police, 90 per cent of these cases originate in Maoming city, Guangdong.

Meanwhile, a total of 3,977 people were arrested in Macao.