Crushed underfoot: The 'Caledonian Sky' after it ran aground on pristine reefs in Raja Ampat 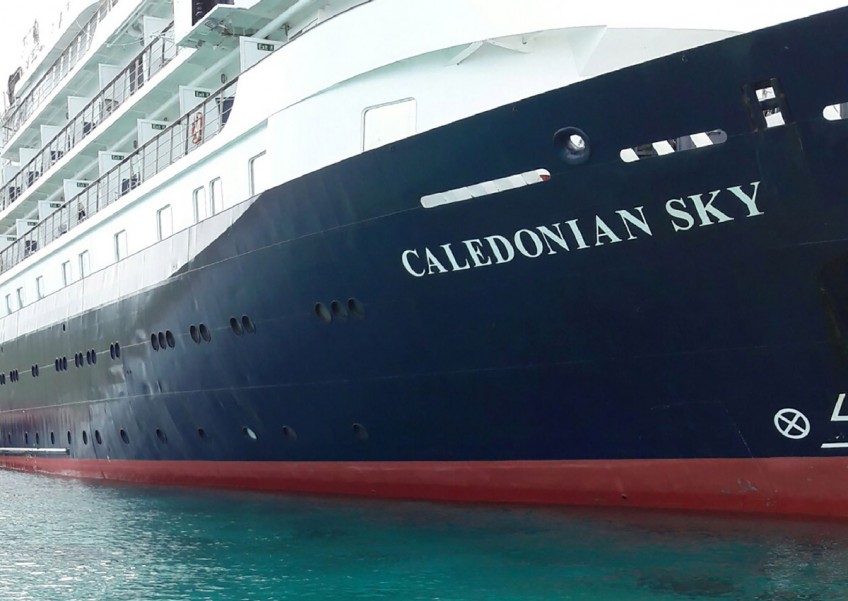 Caledonian Sky, a British-owned cruise ship which smashed into pristine coral reefs causing extensive damage in Raja Ampat, a remote corner of Indonesia known as one of the world's most biodiverse marine habitats.
AFP

SORONG -Indonesia vowed to take action after a British-owned cruise ship smashed into pristine coral reefs and caused extensive damage, as residents of the popular tourist site lamented "paradise" had been ruined.

The foreign ministry in Jakarta said the damage caused by Caledonian Sky could amount to a criminal act, and that authorities may try to seek the extradition of the ship's captain to Indonesia.

Raja Ampat in eastern Indonesia is one of the most bio-diverse marine habitats on Earth, and attracts intrepid travellers and divers to its palm-fringed islands surrounded by coral and fish.

The accident happened this month when the 3,800-tonne ship smashed into the reefs at low tide around Kri, one of hundreds of small islands in Raja Ampat, after taking tourists on a bird-watching expedition.

The boat, which was carrying 102 passengers and 79 crew, became grounded on the reefs and only refloated later on a high tide.

Numerous attempts to free it using a tug boat failed, and only caused further damage to the corals.

Residents of Raja Ampat, located in the remote eastern region of Papua, have expressed anger at the impact on tourism and livelihoods of fishermen, while the government has reacted with fury.

"This will not be tolerated," Indonesian foreign ministry spokesman Arrmanatha Nasir said.

"The government is very concerned and very worried about this incident and certainly all steps will be taken to ensure accountability."

He added one step the government could take was to seek the extradition of the ship's captain back to Indonesia.

Authorities say destruction of coral reef is against the law, and someone found guilty of deliberately carrying out such an act could be jailed for up to 10 years.

After Indonesia, the vessel sailed on to the Philippines and officials have expressed anger the captain did not stay in the country while the damage was still being assessed.

Martin Makusi, a local tourist guide and owner of a homestay in Raja Ampat, said he was "devastated" by the destruction of the reefs.

"This incident makes me sad and angry because the reefs in Raja Ampat are like paradise," he said.

Ricardo Tapilatu, a marine researcher from the University of Papua who headed a team assessing the impact, has said the March 4 accident damaged an estimated 13,500 sq m of coral reef.