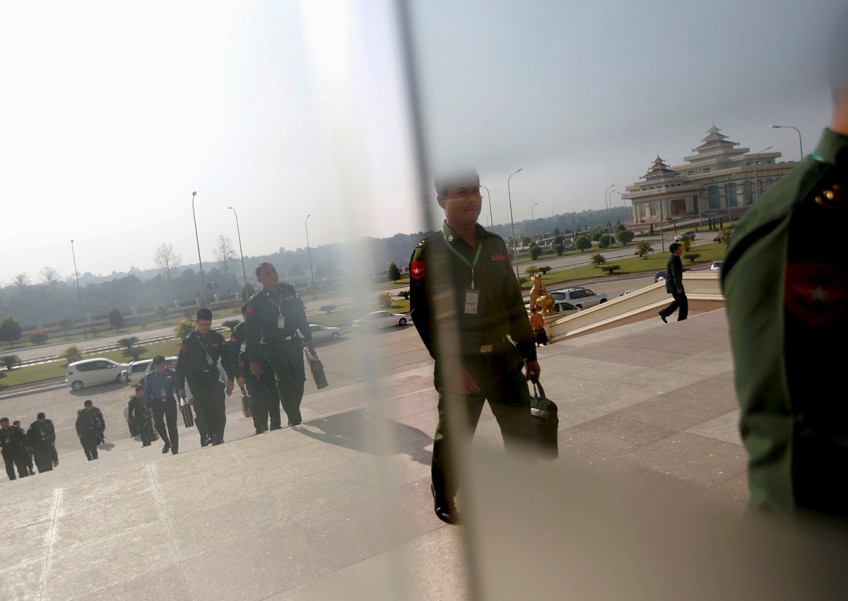 Myanmar's army members of the parliament arrive to attend the last day of the Union Parliament session in Naypyidaw, January 29, 2016.
Reuters

De-mob happy lawmakers from the quasi-civilian ruling party arrived for their last day in parliament amid laughter and jokes, after a five-year term that has transformed Myanmar's political landscape.

For decades Myanmar was seen as a basket-case run by paranoid generals who sunk the economy, crushed dissent and cut the Southeast Asian nation off from the rest of the world.

But reforms since 2011 steered by President Thein Sein have overhauled the country.

They culminated in last year's election win for democracy champion Suu Kyi and her fellow National League for Democracy (NLD) party who take their seats on Monday.

Khin Aung Myint, the outgoing upper house speaker, opened a jocular session, an atmosphere in stark contrast to the usual solemnity that has dominated the military-led chamber.

"I would like to say goodbye to every MP with a funny story about each of them... but time is limited," he said to laughter.

He will remain in his post until the end of March, while the NLD will control the new parliament set to sit for the first time on February 1.

The party faces formidable economic and social challenges in one of the region's poorest nations, as well as the political might of the army.

The military retains huge powers, with a junta-era constitution giving unelected soldiers a quarter of all parliamentary seats as well as key government ministries.

The army-scripted charter also blocks Suu Kyi from becoming president because she married and had children with a foreigner.

The Nobel laureate, locked up by the former junta for 15 years, has vowed to rule "above" the president without revealing who the proxy ruler would be.

Hundreds of new NLD lawmakers, most of whom are new to the business of government, have spent the last few days observing their predecessors in a collegiate atmosphere.

Many outgoing MPs appeared more sentimental than sour at the moment of transition.

Parliament has even arranged a farewell lunch and karaoke session with new and old MPs to be held later Friday.

"I think greeting each other happily is the best way of departing," said lower house MP Khine Maung Yi, who lost his seat to the NLD in November.

"I am going to miss the parliament. That's for sure," he told AFP.

Observers say Suu Kyi and her colleagues will have to learn fast to overcome their relative political inexperience and tackle the host of pressing issues faced by the impoverished Southeast Asian country.

And corruption bedevils the country's creaking bureaucracy, with years of neglect meaning many of the nation's 51 million people still struggle to access basic services.

[[nid:236028]]
SUBSCRIBE TO OUR NEWSLETTER
Your daily good stuff - AsiaOne stories delivered straight to your inbox