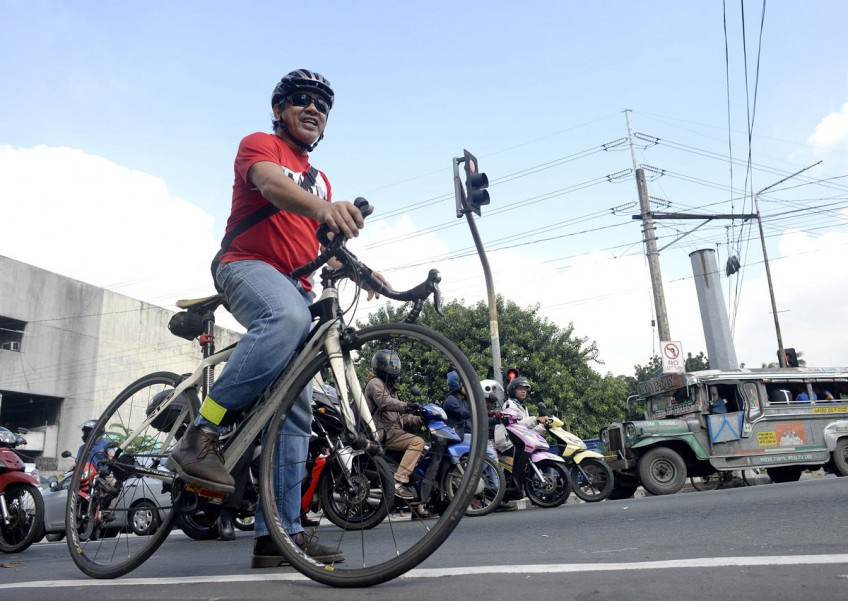 Cyclist Jack Yabut stops on his bike at a street in Manila in this picture taken on October 7, 2015.
AFP

MANILA - Cyclist Jack Yabut is on a perilous and likely futile crusade to help the Philippine capital beat "Carmageddon", but even if his campaign fails - he will have saved time on his own commute.

Traffic in the megacity of 12 million people has reached crisis levels this year, as record car sales have added to long-term problems of decrepit railways, a stunted road network and a law-of-the-jungle driving culture.

In response to the worsening traffic, President Benigno Aquino recently deployed extra police to some of Manila's worst choke points with orders for them to force recalcitrant drivers to obey laws.

But, with relatively little infrastructure spending underway, Aquino has been widely seen as otherwise helpless in trying to ease what enraged commuters and the national press have branded "Carmageddon".

Cycling has barely featured in the discussion of remedies but Yabut, part of a growing community of daredevil bike riding advocates, believes that is a mistake.

"Cycling offers an immediate solution to the traffic and pollution problems," Yabut, 55, told AFP after dodging trucks and buses while riding along EDSA, one of the city's most important and gridlocked roads.

While commuters in cars or on over-crowded buses regularly spend more than two hours travelling just 15 kilometres (nine miles) along EDSA and its arteries, Yabut does that in under 30 minutes.

"It seems crazy to me to be stuck in traffic when you can cycle so much more quickly."

But, for most drivers, cyclists such as Yabut are the crazy ones.

Cycling fatalities are common, and tens of thousands of people have signed online petitions calling for authorities to improve road safety conditions for bike riders.

"It is very dangerous," acknowledged Yabut, a father-of-two and president of cycling advocacy group The Firefly Brigade.

Advocates are lobbying for bike lanes, which are nearly non-existent, as well as to educate drivers that cyclists have the right to share the roads.

"Opening bike lanes is one part of it. But the bigger effort is changing people's perceptions and attitudes," Yabut said.

Among the dangers, cyclists have to negotiate mini-bus "jeepneys" and buses that randomly stop in the middle of roads for passengers, or sweep out suddenly into lanes meant for oncoming traffic.

One of the chief strategists for the capital's transport network, Emerson Carlos, said cyclists should be an important part of the traffic solution.

But, in a candid interview, he said there were few options for them and the ideal of bikes sharing the road with vehicles was unwise.

"It is not safe for cyclists to share the roads with motor vehicles," said Carlos, the Metro Manila Development Authority's assistant general manager for operations.

He said city authorities were trying to establish bike lanes but only on footpaths where there were already many other obstacles, such as electric poles, illegally parked cars and pedestrians.

"The problem is cyclists were an afterthought. We can't move the electric poles," he said.

Meanwhile, Carlos and other city planners appear focused on much bigger problems.

With a fast-growing middle class, the Philippines is in the midst of an unprecedented car-buying frenzy.

An extra 600,000 new vehicles are expected to hit the capital's roads this year, taking the total to three million, according to Carlos.

"Where are all those cars going to go? We already don't have enough roads," Carlos said.

Global road navigation app Waze recently reported that Manila had the world's worst traffic, based on a survey of its users and its own data.

Carlos lamented the lack of other options for commuters, citing figures showing the city's rail network was much smaller than in Jakarta, Kuala Lumpur and other Southeast Asian capitals.

"It's pathetic," he said of the rail network. "We need an efficient, safe and comfortable mass transport system."

A "Dream Plan" recently adopted by the government to fix the urban chaos envisages 65 billion dollars of infrastructure spending over the next 15 years, which would include building a subway system.

But, in a nation bedevilled by government corruption and a chaotic democracy that has seen similar strategies collapse, most people expect the plan will remain a dream.

With few other solutions, cycling offers the opportunity for quick and cheap "big wins" in the traffic war, according to Julia Nebrija, another bike riding advocate and a prominent urban planner.

"It's not rocket science. And it will have a big impact," she said, citing measures such as creating cycling lanes on major roads that have the space, building bike racks at transport hubs and installing showers at offices.

Nebrija and Yabut said one district in the capital had successfully started to introduce a bike network, proving it was possible.

In the meantime, Yabut intends to continue riding with an almost missionary zeal, hoping that his high-stakes, traffic-beating exploits will inspire others.

"We need people to be role models... to be crazy enough to bicycle, so that motorists and pedestrians will be encouraged to bicycle too," he said.