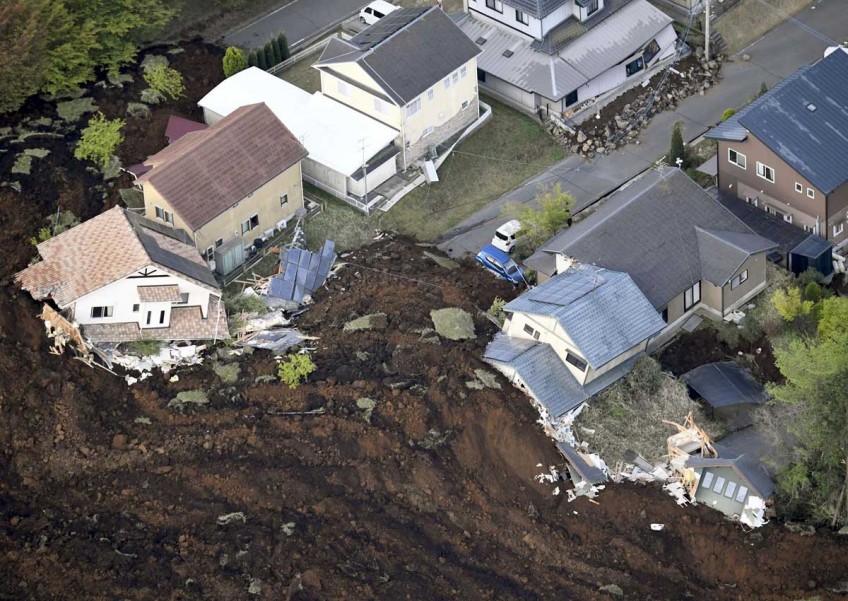 Homes, roads and railway lines were swept away when huge hillsides collapsed as thousands of tonnes of mud was dislodged by the thunderous seismic tremors.

Buildings were reduced to rubble, including a university dormitory and apartment complexes, with dozens of people unaccounted for over a wide area.

"We are aware of multiple locations where people have been buried alive," Chief Cabinet Secretary Yoshihide Suga told a press conference.

"Police, firefighters and Self Defence Force (military) personnel are doing all they can to rescue them."

More than 90,000 people have been evacuated, including 300 from an area close to a dam thought to be at risk of collapse.

A hospital was left teetering by Saturday morning's 7.0 quake, with doctors and patients rushed from the building in darkness.

Kumamoto, Japan - The toll from a second powerful quake in southern Japan jumped to 18 on Saturday, officials said, adding to nine killed earlier.

"Sixteen more people were killed after the second powerful quake," said Mariko Kuramitsu, an official from Kumamoto prefecture. Separately, a university announced the death of two of its students.

Scores of people were feared trapped after the overnight quake on the southwestern island of Kyushu sparked a fresh wave of destruction in a region where nerves were already frayed following Thursday's deadly earthquake.

The quake on the southwestern island of Kyushu sparked a fresh wave of destruction and was followed by a wave of aftershocks in the region where nerves are already frayed following Thursday's deadly earthquake.

The powerful shaking set off a huge landslide that swept away homes and cut off a highway in one area, and unlike the earlier quake which mostly affected old houses, larger buildings were damaged and some toppled across Kumamoto prefecture, the epicentre of the quakes.

Separately, an active volcano in the area erupted Saturday morning, a local government official said, cautioning, however, it was unclear if the small-scale event was linked to the quakes.

Meanwhile, a large fire that broke out at an apartment complex in Yatsushiro city killed one person, city official Kiichiro Terada confirmed.

"We are also checking if any more people failed to escape," he said, adding that the fire was under control.

In nearby Kumamoto city, authorities were evacuating patients from a hospital over fears it could collapse and images showed the building slanted.

Hisako Ogata, 61, evacuated to a nearby park with her daughter, where some 50 other people sat on blue plastic sheets.

"We left my house as we could not stay due to continuous jolts," Ogata told AFP.

"It was so scary," she added. "Thank God we are still alive."

An AFP journalist in the city at the time said he was jolted awake by powerful shaking, which sent the television set in his hotel room crashing to the floor. Staff urged guests to evacuate.

A ceiling at Kumamoto airport collapsed from the shaking, forcing it to close, Jiji Press reported, with no immediate plans to resume flights, and communications in the area were spotty.

Japan Meteorological Agency official Gen Aoki said Saturday's quake was the strongest to hit Japan in recent days, and that Thursday's was merely a "precursor".

The US Geological Survey measured the quake at magnitude 7.0, or 6.3 times bigger than the 6.2 tremor recorded on Thursday.

Japan Meteorological Agency, which put the magnitude at a revised 7.3, initially issued a tsunami warning for the western coast of Kyushu but later lifted it.

"It was really strong... many people on the street appeared panicked," he told AFP.

Some 20,000 soldiers will be deployed to the area over the weekend to help rescue efforts, Defence Minister Gen Nakatani told reporters.

Prime Minister Shinzo Abe was due to visit Kyushu later Saturday to inspect damage and rescue efforts, but Jiji reported his trip was cancelled.

"We are trying our best to assess the damage situation as it could spread," he told reporters.

Japan, one of the most seismically active countries in the world, suffered a massive undersea quake on March 11, 2011 that sent a tsunami barrelling into the country's northeast coast.

Some 18,500 people were left dead or missing, and several nuclear reactors went into meltdown at the Fukushima plant in the worst atomic accident in a generation.