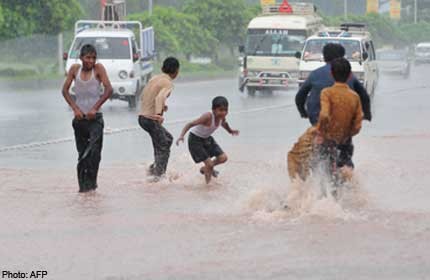 Pakistani youths play in a waterlogged road as monsoon rain falls in Islamabad on August 6, 2013.

ISLAMABAD- Monsoon rains triggering floods have killed 84 people across Pakistan in the last week and affected more than 80,000 others, officials said Wednesday, warning of further downpours.

"At least 84 people were killed, 44 were wounded and 81,341 were affected by recent rain and flooding," a senior official in the National Disaster Management Authority (NDMA) told AFP.

The official said flood waters and rain had destroyed 2,533 houses throughout the country and that contingency plans remained in place as heavier rains are expected next month.

Pakistan has suffered monsoon floods for the last three years and been criticised for not doing more to mitigate against the dangers posed by seasonal rains washing away homes and farmland.

In 2010, the country's worst floods in history killed almost 1,800 people and affected 21 million.

Karachi, a city of 18 million people, which contributes 42 per cent of Pakistan's GDP has suffered heavily as a result of rain water flooding markets, buildings and houses, and blocking roads.