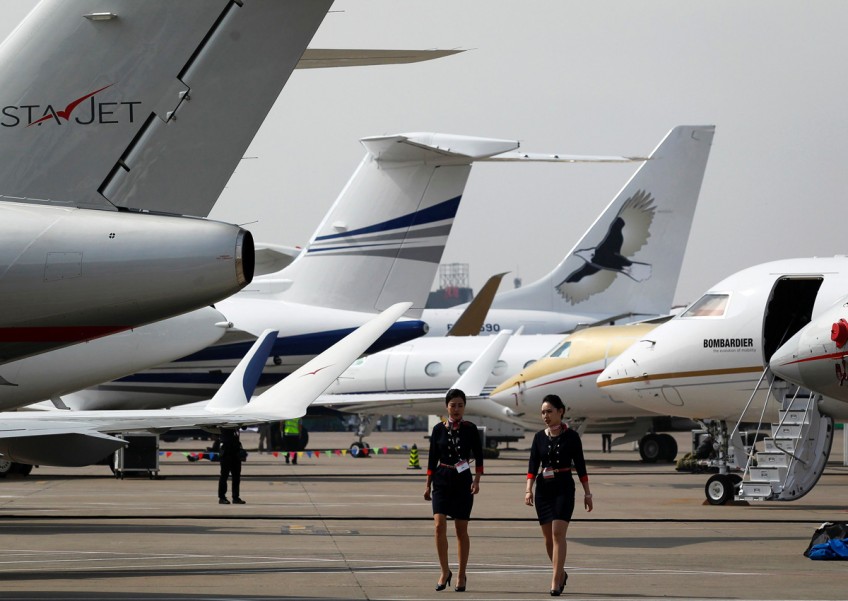 SHANGHAI - China's homegrown regional jet should have made its first commercial flight weeks ago, but the ARJ21 has still not flown any fare-paying passengers, dealing yet another setback to the country's ambitious plans for domestically produced planes.

Chengdu Airlines received the aircraft from manufacturer the Commercial Aircraft Corp. of China (COMAC) in November, already years behind schedule, and it made several "demonstration" flights without passengers in January.

It was scheduled to ferry passengers from its home base in southwest China to commercial hub Shanghai on February 28, according to media reports, but has yet to do so. Neither the jet's maker nor the airline were willing to say why.

"The Civil Aviation Administration of China is still doing preparation work for the first flight, so maybe it hasn't finished," a COMAC spokesman told AFP, referring to the government regulator. "The airline and CAAC have the final say." A CAAC spokeswoman referred questions about the issue to the airline.

Chengdu Airlines, whose fleet consists of 21 A320 aircraft made by European consortium Airbus and the single ARJ21, declined to give a date. "There is no exact time," a spokesman said.

When the ARJ21 - which stands for Advanced Regional Jet for the 21st century - finally takes to the skies for commercial flights, it will be the culmination of a programme that has so far taken 14 years.

First formally approved by the government in 2002, journalists were shown the body of the plane five years later, when officials confidently predicted deliveries in late 2009.

Some Chinese see it as their patriotic duty to fly on the homegrown aircraft.

"Support the domestically made plane! I would take it!" said an online posting.

But first COMAC must win over customers and passengers about the ARJ21's quality and reliability. The aircraft still lacks the crucial US Federal Aviation Administration (FAA) certification that would allow it to fly in US skies.

Some potential passengers expressed worries. "It's not that I am unpatriotic. To be honest, I don't dare take the plane. It's still Boeing and Airbus (for me)," said an online post by Tang Kanyang, who identified himself as a lawyer.

In November, it rolled out the C919, China's first domestically developed narrow-body passenger plane, the next step up in size. Officials said at the time that it would make its first test flight this year, though reports say it might also be delayed.

The Shanghai-based company will partner with US aircraft maker Boeing to set up an interior completion centre in China, and aims to produce an even larger wide-body jet in co-operation with Russia's United Aircraft Corp. whose products include the Sukhoi Superjet 100.

The ARJ21 was also a no-show at China's major show for corporate jets in Shanghai last week, though it does have a business version and could potentially compete against some of the foreign brands that were displayed on the Hongqiao Airport runway.

COMAC restricted itself to display miniatures of the ARJ21 at Asia's premier air show in Singapore in February.

"They (Chinese officials) are looking at these market segments thinking: How can we do what Boeing and Airbus have done?" said Jeff Lowe, managing director of aviation services provider Asian Sky Group.

But most manufacturers do not view the COMAC plane as a competitive threat yet, even though the Chinese commercial aircraft market is already Asia's largest and crucial to their plans over the next decades.

"They have a product. We have ours," said Fernando Grau, director of marketing and product strategy for executive jets of Brazil's Embraer in China.

The ARJ21 is comparable in seating capacity to Embraer's E170 and E175, parts of a family of aircraft with more than 1,100 deliveries.

Foreign jet makers can offer a far more extensive product line and industry executives said COMAC was seeking to develop what took other manufacturers decades to do.

"Currently, we don't see anything that competes with us in terms of a traditional business jet," said Scott Neal, senior vice president for worldwide sales and marketing for Gulfstream of the United States.

"It's taken us 60 years to gain the position we have and the expertise in designing and building high-technology, high-performance corporate aircraft." Asked whether China could one day field a rival, he said: "Time will tell."