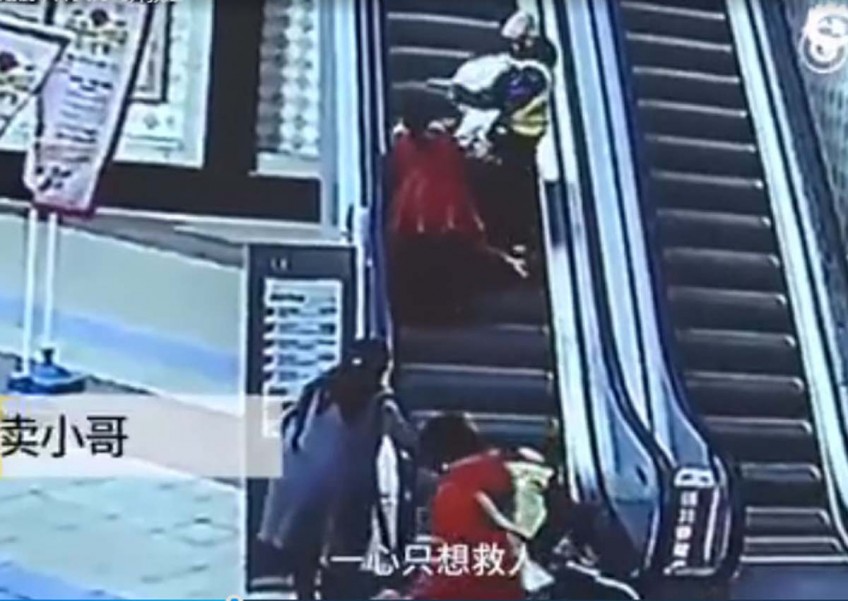 A mother had just stepped onto the escalator in a shopping mall in Hubei, China, when the baby pram she was pushing suddenly toppled sideways.

As the escalator moved upwards, both mother and baby tumbled down the steps.

Fortunately, a pair of quick-thinking delivery men went to their rescue.

Dropping their items, one of them scooped up the baby while the other brought the escalator to a halt by pressing the emergency stop button.

Meanwhile, another woman rushed forward to help the mother to her feet.

The heart-stopping footage of the accident on March 7 was captured by the mall's CCTV.

The men told reporters that they had been picking up food deliveries in the vicinity when they noticed that the mother and child were in trouble.

One of them said that he had to compensate his customer for failing to make his delivery.

However, he felt that it was "worth it" as the baby wasn't hurt in the accident.

And it appears that the men's good deed did not go unnoticed, as they will be receiving awards from their delivery company, Chinese media reported.

Although mother and baby got away unscathed in this accident, it highlights a growing number of escalator accidents that involved young children.

In January, a baby in Uzbekistan fell to his death after his mother lost her balance while carrying him on the escalator.

Another four-month-old baby in Shanghai died after plunging three storeys when his grandmother tripped while riding an escalator last year.