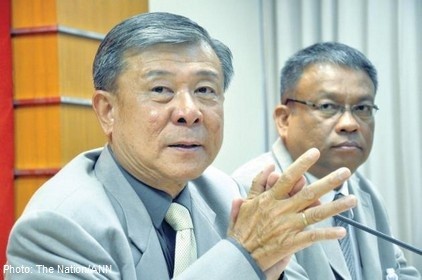 Democrat MP Vilas Chanpitaksa said in his capacity as the chair of the House panel on anti-corruption, he will summon officials from various agencies next Friday to testify about alleged budget irregularities.

The opposition Democrat Party yesterday demanded that the budget earmarked for the construction of a tunnel between the Mae Kuang and Mae Nguad dams be cut by 20 per cent as neither dam has any water that can flow through the tunnel.

The project had been proposed by the previous Democrat government to generate water in the area in Chiang Mai, Democrat Bangkok MP Vilas Chanpitaksa said.

The initial budget for the project was Bt15 billion, but the current government increased it to Bt17 billion for the next four years, he said. The Agriculture Ministry then proposed another Bt6 billion for this year for the project, which the Democrats think is unreasonable, he added.

The two dams have only 10-20 per cent of water left in their reservoirs, which is not enough for the project, hence the budget should be cut, he said.

Meanwhile, Agriculture and Cooperatives Minister Yukol Limlamthong defended the ministry's request for Bt77.2 billion, saying it was needed for different projects, notably the rubber and rice schemes, which are currently under attack by the opposition.

The government has tried to solve the problem of declining rubber prices but the measures have not yielded any results yet, he said.

Deputy Agriculture Minister Varathep Ratanakorn said the government had maintained the Bt15,000 per tonne price under the rice-pledging scheme, adding that the new price announced earlier had yet to be fixed.

After a five-hour-long debate, the House of Representatives approved a budget of Bt76.8 billion for the Agriculture Ministry.

Meanwhile, the Bt10.3 billion proposed budget for the Social Development and Human Security Ministry was cut by Bt60 million, and passed yesterday.