Desperation in the epicentre of Southeast Asia's haze crisis 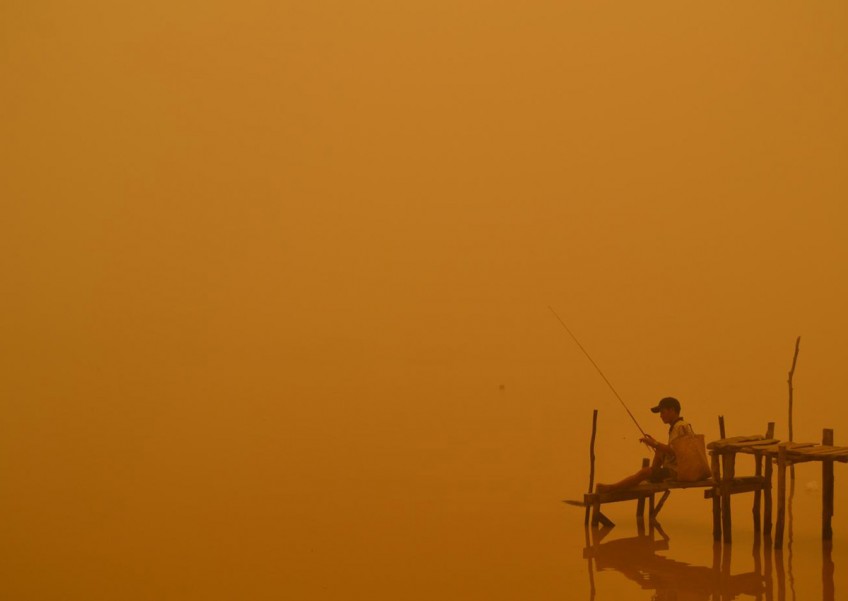 A resident fishes by the river in Palangkaraya city, one of worst-hit by haze in central Kalimantan province, on October 21, 2015.
AFP

PALANGKARAYA, Indonesia - When the smoke from forest fires turned a thick, acrid yellow, casting an apocalyptic glow over Palangkaraya, Kartika Sari decided to grab her child and flee the Indonesian city at the epicentre of the haze crisis smothering Southeast Asia.

The 32-year-old pharmacist and her three-year-old daughter have for weeks been inhaling toxic air in Palangkaraya, a city of 240,000 that has been engulfed in poisonous darkness by smoke from peat land set alight to clear land for palm oil plantations.

"The smoke was no longer white, it was yellow," she told AFP from an evacuation centre in Banjarmasin, a six-hour drive from Palangkaraya.

"Usually we just endured it, even though we had headaches and felt nauseous. But it has got so bad lately, that I can't take it anymore. I can't even breathe fresh air." Now she waits in limbo in a basic shelter with nine other evacuees, mostly children, including a one-year-old boy suffering from a severe cough and diarrhoea.

Authorities say the fires from slash-and-burn farming in Borneo and neighbouring Sumatra have killed 10 people so far, some of whom died while fighting the blazes and others from the pollution.

Respiratory illnesses in Palangkaraya have soared as the choking smog has worsened in recent weeks.

While many have relocated to safety elsewhere with friends and relatives, others have no choice but to stay behind despite the risks posed by the noxious haze.

39-year-old Rahmah, a street vendor in Palangkaraya, said she needed to keep doing her job to pay her children's school fees, despite the toll on her health from working outdoors.

"I have to stay whether I like it or not. My livelihood is here so how can I leave?" Rahmah, who like many Indonesians goes by one name, told AFP on the porch of her riverfront wooden house in Palangkaraya.

"You get light headed after a while, but I just try my best to cure myself with simple medication." Her neighbour Nurjanah, who shares a small house with seven other family members, including her five-month-old granddaughter, echoed the sense of desperation felt in the blighted city, where visibility is sometimes as low as a few dozen metres (yards).

"Leave? Where to?" Nurjanah said, when asked why she doesn't evacuate.

"The smoke gets everywhere, so what's the point of evacuating when there's no escape?"

At a nearby health clinic, hundreds of people queue for hours for a chance to use one of the 10 oxygen tanks available to get a breath of fresh air.

Even there the haze finds its way in, swarming around 23-year-old English teacher Ayu Dwitasari, who has suffered from bronchitis for days and is having trouble breathing.

"It's got especially bad today, that is why I came here," Dwitasari told AFP.

Mass evacuations - especially of children and those suffering chronic respiratory illnesses - were not out of the question, said Indonesian military spokesman Tatang Sulaiman.

Three warships carrying medical teams, tents, cooking stoves and protective masks were on their way to the worst-affected regions in Kalimantan - Indonesia's half of Borneo - and Sumatra, he said, to help build temporary shelters away from the haze-plagued cities.

"Our warships are ready to evacuate residents, whether to these temporary shelters, or even to take them on board. We are prepared for that," he told AFP.

But for those fighting the fires, a lack of equipment and tinder-dry conditions are hampering their best efforts to curb the thousands of blazes smouldering on carbon-rich peat lands.

In Kuala Kapuas, not far from Palangkaraya, 33-year-old volunteer Rahmat Muhamad Noor and around 20 others toil around the clock fighting the fires, struggling with limited water and poor equipment.

Wearing thin rubber boots and a cotton face mask, Noor tried desperately to stamp out a fire with a wooden stick after the machine pumping water through the hose broke down.

"Please tell the government we need more help," he told AFP. "We need masks. We can't go on like this."