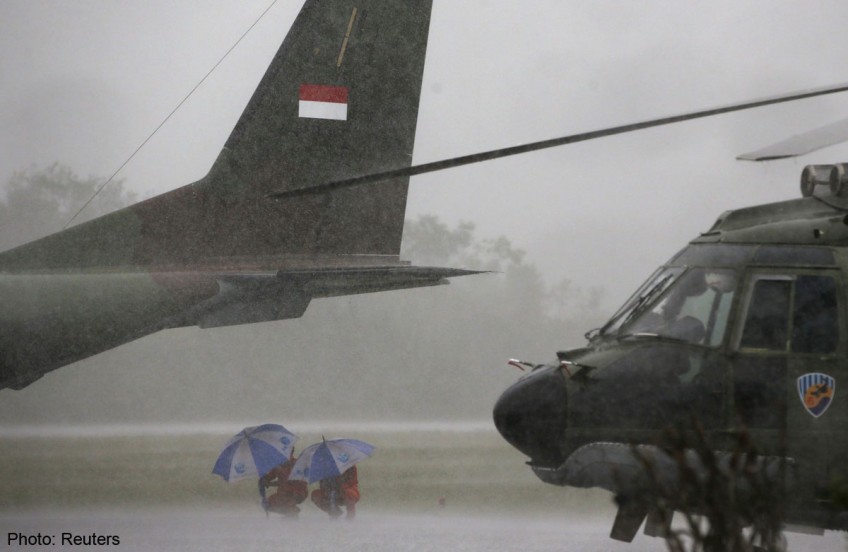 Bad weather has been hampering search operations for Indonesia AirAsia Flight QZ8501. The airline stressed that it takes weather reports seriously and evaluates them carefully.

A week after Indonesia AirAsia Flight QZ8501 crashed amid rough weather, questions are being asked about whether the pilots received a weather update and briefing before departure.

This is standard operating procedure, other pilots said.

In a report to Indonesian Transport Minister Ignasius Jonan - which was leaked to local media - Indonesia's Meteorology, Climatology and Geophysics Agency said the airline collected the weather report at 7am.

This was about 1½ hours after the plane left Surabaya's Juanda International Airport at 5.35am on Dec 28.

By then, the Airbus 320-200 bound for Singapore had crashed into the Java Sea, presumably killing all 162 people on board.

The airline's chief executive officer Sunu Widyatmoko has denied any wrongdoing and stressed that it takes weather reports seriously and evaluates them carefully, said The Jakarta Post.

"These reports are accepted by the operations control centre at all AirAsia Indonesia hubs, which are in Jakarta, Medan, Surabaya, Bandung and Denpasar, where they are printed out and kept by pilots," he added.

In a text message to reporters yesterday, an official from the Transport Minister's office, Mr Hadi Djuraid, seemed to suggest the airline may have received the weather update before the flight but did not conduct the required briefing.

This is to ensure pilots know what to expect on a flight and are prepared for problems.

"The ministry does not require an airline to pick up a weather report physically but there must be discussion," he said, stressing it is the airline's duty to ensure there is a system and procedure for this.

Pilots and experts The Straits Times spoke to said it would be "highly unusual" and "shocking" if the pilots departed without a weather report and discussion.

Mr H. R. Mohandas, a former pilot and instructor, said it is critical for pilots to get advance information not just on expected weather patterns but also technical details such as repairs to the plane.

Pilots are also updated on other details, such as sensitive cargo that may be on board, added Mr Mohandas, programme head for the diploma in aviation management at Republic Polytechnic.

The usual procedure is to obtain all relevant information about 45 minutes to 11/2 hours before the scheduled departure.

Captain Mok Hin Choon, president of the Air Line Pilots Association - Singapore, declined to comment on the specific case. Commenting generally, he said: "It is standard procedure for pilots to receive weather and other flight-related information before departure.

You need to know what to expect so you can plan your flight path and be prepared for any bad weather, for example."

The latest controversy deals another blow to Indonesia AirAsia, which faces an official probe by the Transport Ministry for allegedly operating the Surabaya-Singapore sector on Sundays, the day of the doomed flight, without permission.

"He is just a victim and has not been found yet. My family is now mourning. As a daughter, I cannot accept it. No pilot will harm his passengers."

This article was first published on January 05, 2015.
Get a copy of The Straits Times or go to straitstimes.com for more stories.