Diplomatic tussles not foreign to this minister 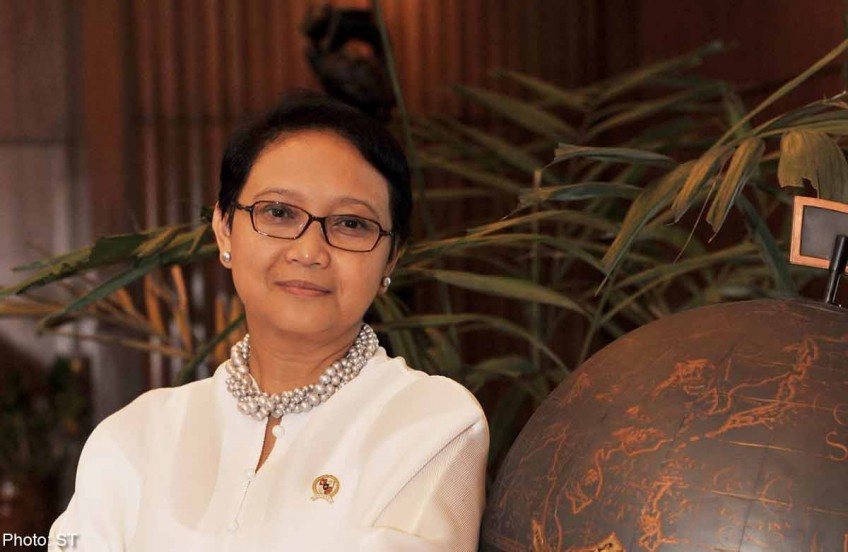 Mrs Retno Marsudi said the executions of death row convicts and destruction of illegal fishing boats were not about politics, but about enforcing the law against serious crimes.

INDONESIA - Foreign Minister Retno Marsudi says her country is not unfriendly, merely exercising its right and following the rule of law when handling issues of illegal fishing in its waters and executions.

"When a country wants to carry out law enforcement, I don't think that should be perceived as being unfriendly to others," Mrs Retno, 52, a career diplomat of nearly 30 years, told The Straits Times in an interview.

Barely five months into her job, the country's first female foreign minister has been thrust into a diplomatic tangle with foreign countries demanding that Indonesia back down from executing their nationals who have been convicted of capital drug offences and ambassadors expressing concern at the country's policy of destroying illegal foreign fishing vessels.

It is "not fair at all" that there is a view that Indonesia is becoming confrontational or aggressive in its foreign policy when it seizes boats or destroys illegal fishing boats caught in Indonesian waters, she said. "It would have followed all legal process and been based on the court's decision," said the mother of two sons.

Shortly after President Joko Widodo was sworn in last October, he said illegal fishing cost the country 300 trillion rupiah (S$318 million) in losses a year. Vessels from several countries were detained for poaching in Indonesian waters.

In December, maritime officials said 22 boats suspected to be Chinese-owned had been caught, but the navy later reported that only eight had been seized.

There have been no updates since, raising questions over whether Indonesia would apply the same laws to errant vessels belonging to its strategic partners. But Mrs Retno insists the laws will be applied without discrimination.

Jakarta's resumption of executions by firing squad this year has also raised diplomatic tensions with countries such as Brazil, the Netherlands and Australia.

Australian Prime Minister Tony Abbott riled Indonesians when he suggested that Jakarta should free two of its citizens on death row to "reciprocate" Canberra's US$1 billion aid in the wake of the 2004 tsunami.

"The (executions)… are not a diplomatic issue, not a political issue, but are all about enforcing the law against a serious crime."

Retno on her appointment, close ties with S'pore

On being the first female foreign minister in Indonesia:

"When the President decided to appoint a female foreign minister, I think it goes without saying that he is also sending a very important message to the world: That Islam, women empowerment, moderation, modernisation can all go along together."

On warm relations with Singapore and PM Lee, and texting Foreign Minister Shanmugam for a chat:

"We have made plans to go to Singapore twice, but our schedules did not match. "My President and your PM (Lee Hsien Loong) click very well since the last meeting in November. "Singapore is one of our most important partners in economy, politics and in many areas. "At my level, I have very good relations with Singapore Foreign Minister K. Shanmugam and whenever we need to chat, I text him."