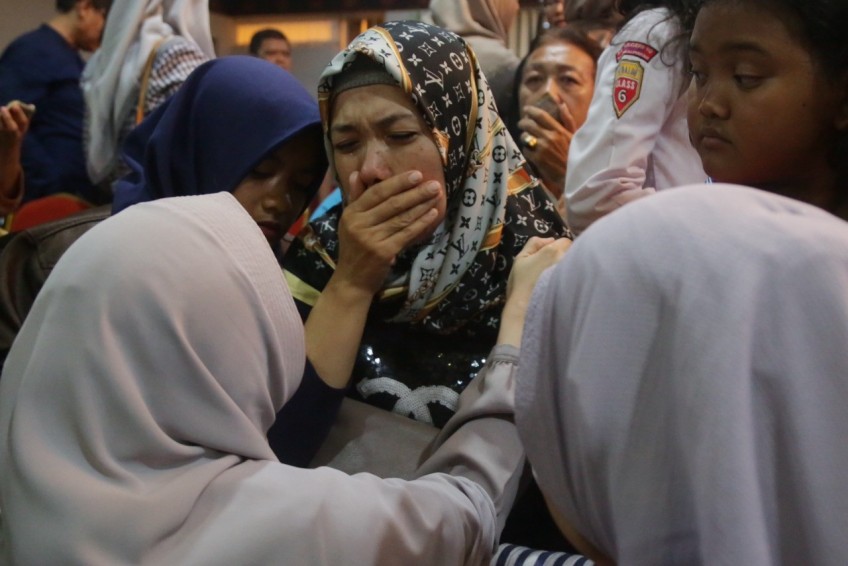 Family members of the passengers aboard the Lion Air flight JT610 are looking for information at the crisis center at the Soekarno Hatta International Airport, on Monday.
The Jakarta Post/Asia News Network

Twenty-six-year-old Kezia Saroinsong bowed her head in grief while standing silently in front of the Halim Perdanakusumah Airport maintenance office in East Jakarta, waiting for the latest update on her brother, Hizkia Jorry Saroinsong, 23.

Hizkia, a student of the University of Indonesia, was aboard the Lion Air flight JT610 travelling from Jakarta to Pangkalpinang, Bangka Belitung Islands, to attend an event as a representative of AIESEC, an international non-profit youth organisation focusing on developing leadership skills.

"He travelled all the time," Kezia told The Jakarta Post on Monday. "He just got back from Bandung last weekend before travelling to the scheduled event in Pangkalpinang."

"He updated us in the family group chat before he departed in the morning. It was the last thing we heard from him," she said.

Kezia held high hopes that her brother might have survived the crash, but she went quiet, perhaps realizing that the chances were low.

Other families or friends of the victims sobbed silently while waiting for updates on the search efforts at the crisis centre set up by the airline at the airport.

Alvian, an official from state-owned insurance firm Jasa Raharja, who helped the airline register the victims, said over 100 people had arrived at the crisis centre to get reliable information surrounding the fate of their loved ones. One-hundred-and-eighty-one passengers and eight crew members were aboard the plane that went missing on Monday morning.

He did not have much information that he could share with them.

She said Man had divided his time between Jakarta and Pangkalpinang as his family lived on the outskirt of Jakarta.

"He usually flew to Jakarta on weekends to see his wife and three kids and catch the earliest flight on Monday morning so he could go back to work," she said.

Travelling between the two cities was part of Man's routine, but the last trip was rather special for the family because he had come back especially to attend his son's confirmation ceremony.

The Lion Air flight JT610 was the earliest flight available from Jakarta to Pangkalpinang at 6:20 a.m., making it popular among people working in the city. Among the passengers were government officials with the Finance Ministry, the Supreme Audit Agency and the Energy and Mineral Resources Ministry, as well as local councillors.

President Joko "Jokowi" Widodo took his time on the sidelines of an international conference in Bali and shared his deep empathy for the families of the victims.

"I can feel the anxiety of the families of the victims. But we hope the families can wait patiently," he said.

The news about the JT610 flight also came as a bolt from the blue for Ramlan Manik, 60, and his whole family. Only two days earlier, his son-in-law Rudi Lumbantoruan, who was aboard the plane, celebrated his 11th wedding anniversary with his wife and two children in his hometown Sibolga, North Sumatra. Rudi worked as a plantation manager in Pangkalpinang.

Ramlan would never forget Rudi's last words to his sister-in-law, who was planning her wedding. "This is a present for you, a pair of shoes, in case I won't be able to come home for your wedding because I have used all of my annual leave days."