Distraught Hong Kong villagers battle to save their homes 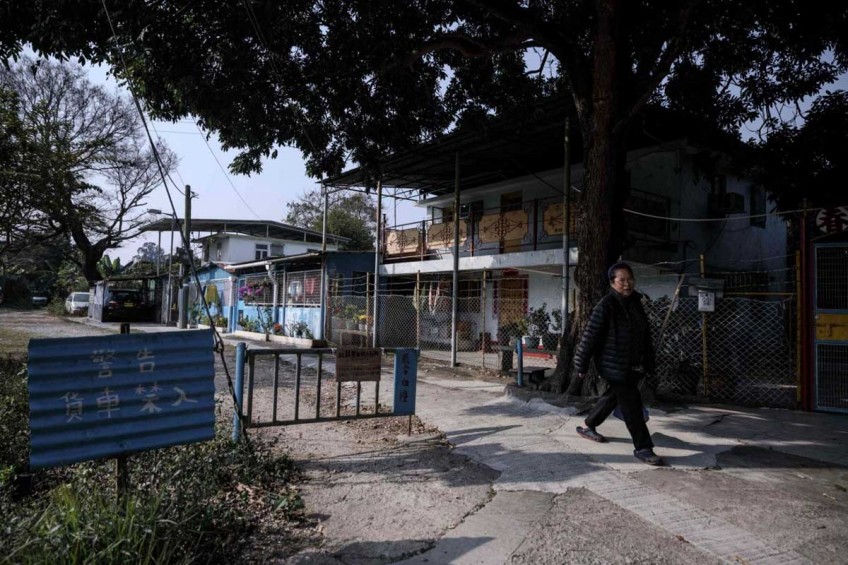 Residents living in Ko Oi-sum's simple village have been served an eviction notice by the government, asking them to leave by 2018 to make way for a new housing development.
AFP

Ko Oi-sum's simple village home on the northwestern edge of Hong Kong is surrounded by trees planted by her mother - she dries the leaves to make tea, espousing their health benefits.

But this ramshackle rural community of narrow alleyways, humble houses and freely roaming cats and dogs, is now under threat.

Residents have been served an eviction notice by the government, asking them to leave by 2018 to make way for a new housing development.

Some politicians say expanding into less populated parts of Hong Kong is essential, with affordable homes hard to find in densely packed urban areas where rents are sky high.

Much of the territory outside the city's main commercial hubs is forest, park land and rural settlements.

But critics say the government's approach benefits a clique of private developers and powerful rural elites, at the expense of the public.

A month after her family received the eviction news, Ko's mother suffered a stroke, which her daughter blames on shock. She passed away a year later, last December.

"My mum was not emotionally prepared," she told AFP.

"She didn't want to live in public housing or a high-rise... She'd put her heart here." Ko lives in a cluster of three villages known as Wang Chau, home to fireflies, indigenous tree frogs and around 100 households.

The villages are set to be demolished to make way for 4,000 public housing units.

Some residents have been there all their lives, after their parents came over from mainland China in the 1950s.

While most built their own homes, they rent the land their houses stand on from private individuals, mostly indigenous villagers who have now moved away.

Villagers and campaigners believe compensation for the destruction of the site would be to landowners, not to home owners, although the government has said it will make payouts to some residents.

But they say they were not consulted about the project and do not want to give up their communities.

"My roots are here," said one villager who gave her name as Miss Lam and grew up in Wang Chau.

A water well outside her house was hand-built by her late father.

The government has said relocation is "inevitable" and that it will provide cash or rehousing to eligible residents, without detailing who would qualify.

But villagers blame authorities and local power blocs for hanging them out to dry - Wang Chau is now peppered with banners decrying corruption and displacement.

The rural areas of Hong Kong are dominated by a political network known as the "kuk", who are represented in the legislature and participate in voting for the city's leader.

Plans for the development of Wang Chau originally targeted a car park and storage facility owned by a rural leader.

Read also: Sit up and take notice of higher demand in Asia for furniture

But a new scaled back proposal only earmarks villages for destruction, with reports the scheme was changed to avoid confrontation with some "kuk" members.

The government has defended the move, saying it needs more time to consider how to develop the areas now left out of the plan - which could have yielded 13,000 more flats.

Chu won the most votes of any candidate in legislative elections last year as the public rallied around the rural redevelopment issue.

He has received death threats since he ran for office and suggests there are links between the government, businesses, the rural elites and criminal "triad" gangs.

Chu says the shadowy system allows developers and rural leaders to wield outsize influence, including over the city's development plans.

Wang Chau villagers have made tearful representations to lawmakers.

"The government only does these backroom negotiations with rural leaders while shutting their ears to the people who actually live here, sweeping us out like rubbish," said one resident, Lo Kuen, speaking in parliament last November.

Wang Chau is not the only rural area in the firing line.

Those plans would affect 6,000 villagers and include the building of luxury flats.

Read also: From dirt poor to multi-millionaire: Asia's top MMA promoter on how to get rich by helping others

"Where can we move to when the countryside and farmland have all become government targets for development?" said Becky Au, 31, a farmer who is the third generation of her family to live in the northeastern village of Ma Shi Po.

As political candidates promise more new homes ahead of a vote for Hong Kong's new leader Sunday, villagers plan further protests to make sure they do not lose their own.

"We don't feel much hope, but don't want to give up so soon either," he said.