Divisive statues of a general? Put them all in a Taiwan park

As the United States wrestles with the problem of what to do with monuments to a divisive history, Taiwan has found a solution -- a park dedicated to unwanted statues of a controversial figure from its past.

More than 200 memorials to Chiang Kai-shek, the former nationalist leader of Taiwan revered as a hero by some but despised as a dictator by others, have been quietly removed from schools and government buildings, and brought together in a serene lakeside spot.

Each day, tourists roam among the 253 figures at the Cihu Memorial Statues Park, which come in a variety of colours -- some teal, some bronze and some copper red.

The largest piece is an imposing figure of a seated Chiang, removed from a government office in the southern city of Kaohsiung in 2007. Close by are two scultures of Chiang's son Chiang Ching-kuo, who along with his father oversaw decades of political purges known as the "White Terror".

Today the statues are less revered monuments and more popular selfie spots, where tourists pose alongside the hotchpotch of weathered busts and towering casts.

"We don't see (these) statues as political totems. We treat them as historical and cultural heritage," said Huang Chao-jin, a Taoyuan official.

Like the pro-slavery Confederate leader Robert Lee, Chiang's role in his country's past continues to polarise its present.

Both generals fought and lost civil wars; both are symbols of a noble past to their supporters, and of a dark, best-forgotten history to their detractors.

But while lawmakers and activists in America´s South grapple over whether to destroy, cover up or honour memorials to Lee and his fellow generals, Taiwanese authorities say the relocated Chiang statues -- shorn of their original context -- have lost their partisan edge, and have become a popular tourist draw.

Although there is no tally of visitor numbers to the statue park, located a stone's throw from Chiang´s mausoleum in northern Taoyuan city, about 2.2 million come to the area.

Among them, citizens of now-democratic Taiwan who have come to pay respects to a man who waged war against communist China. They rub shoulders with visitors from the mainland who remember a leader who fought bravely against the Imperialist Japanese.

"Mr Chiang was an extraordinary man. We in China are grateful for what he did in the war against the Japanese," said Dai Yukuan from China's Anhui province, visiting Taiwan for the first time.

"After all, it is all in the past. What we Chinese really want is cross-strait peace."

The serene park offers a stark contrast to events in Charlottesville earlier this month, where a violent rally by right-wing groups to protest removal of a statue of Robert Lee descended into chaos.

One woman was killed after a white supremacist allegedly ploughed his car into a group of anti-racism counter-protestors.

President Donald Trump condemned the "foolish" removal of Confederate statues, saying US culture and history were being "ripped apart."

In Taiwan, the debate over history continues, but is more measured.

In the capital Taipei earlier this year, a memorial hall named after Chiang stopped selling souvenirs depicting the former leader.

The decision was taken on the 70th anniversary of a brutal massacre of protesters by troops from Chiang's Kuomintang (KMT) party, when the now democratic island was still under martial law.

Taiwan's culture minister said at the time that Chiang had left a "deep scar hidden in the hearts of all Taiwanese".

But at the statue park, even as the number of memorials grows each year, their divisive power appears to have drained away.

"It doesn't feel like the statues were moved here willingly to be commemorated," said Taiwanese Lin Hui-chun, 33. "There's more a feeling of abandonment." 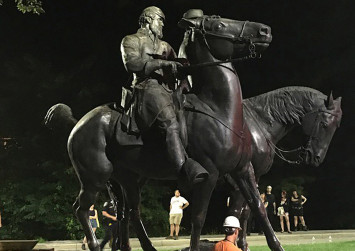