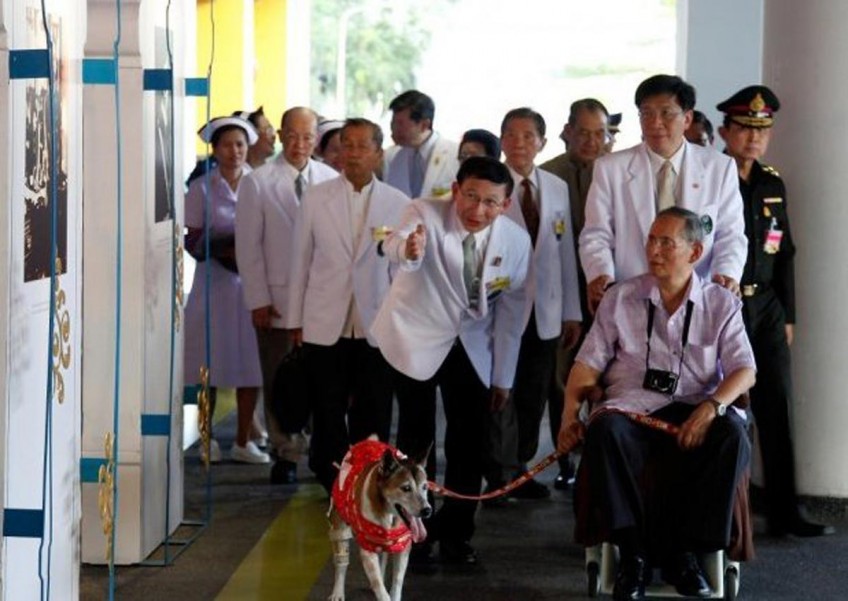 The sense of shock that descended on citizens across the country last October 13 as news spread about the death of His Majesty King Bhumibol Adulyadej led to a multitude of emotions.

Sanjai Sangvichien had one specific duty on his mind. Professor Dr Sanjai, former dean of anatomy at Siriraj Hospital, got the call that day to prepare the embalming fluid for the deceased King's remains.

In hindsight, he knows, it was "the most important task of my life".

Dr Sanjai shared his thoughts about that day and its aftermath along with Dr Teerawat Kulthanan, former dean of Mahidol University's Faculty of Medicine at Siriraj, in a discussion at the hospital last week titled "Sirakran Phra Bhuban Nawamintr".

"I knew there were rumours going around the hospital, where a big crowd had gathered praying for His Majesty's health," Sanjai said. "I got a call at about 4.30pm to be ready for the task. I'd known the situation could come up at any time, but when it finally happened, I just felt numb."

"I had to wait around anxiously until 7.30, after the official announcement, and then I got started. I paid my respects at the foot of his bed and was finished by about 8.30."

In his youth he'd seen the future monarch return home from Europe alongside his elder brother, His Majesty King Ananda Mahidol (Rama VIII).

"I remember that well - so many people greeting the new King, who was very handsome. The brothers visited Siriraj Hospital and spent a great deal of time in the anatomy room.

"My father, Dr Sud Sanvichien, said the younger brother was very interested in the microscope images."

The happiness of those days was short-lived.

"On June 9, 1946, it was announced that King Rama VIII had died and there was chaos, everyone rushing to dye their clothing black," Sanjai recalled.

"The new King, Bhumibol, would return to Switzerland soon afterward, and then came the news that he'd been in a car accident. We were in misery for almost a year, but finally there was the good news that the King was returning to Thailand and would be getting married too!"

[[nid:380584]]
Sanjai urged young people to get out and watch the royal funeral procession, or at least the rehearsal. "It will be one of the most memorable events of your lives - I still vividly remember the funeral of King Ananda.

"Back then most people didn't even have television - only the newspapers - and we all waited for permission to be granted for newsreel films of the royal family to be screened at the Sala Chalermkrung Theatre. That's how people stayed close to the beloved monarch."

Sanjai fondly recalled the ways His Majesty King Bhumibol bonded with the common people and won their affection on his travels around the country and while presiding at university convocations and musical performances.

"Whenever Their Majesties the Queen and the late King were overseas, the country was tranquil - but lonely for them."

In the silence that followed there were audible sobs among the listeners. Teerawat was among the doctors attending the late King during his long final stay at Siriraj Hospital. He said His Majesty always showed caring attention to everyone who came by.

When Teerawat was appointed dean of the faculty, he introduced himself to the King. From their subsequent discussions, he recalled, he came away with two important life lessons - "Be like a new student and be attentive and determined in your work".

Teerawat has shared that guidance with fellow faculty members ever since. "I always encourage my colleagues and students to memorise those words. Even a senior doctor should keep studying, as if they were a freshman student."

Teerawat said the late King invariably demonstrated patience and perseverance while he was being treated at the hospital.

"His Majesty always worked so hard out of his concern for the people, and the physical therapy prescribed for him was quite difficult. But he did it with great perseverance despite his advanced age.

"Sometimes the King asked if we'd had enough sleep!" Teerawat said the late King's kindness was clear in "his compassionate eyes, which always lifted our spirits and relieved us of any tiredness. When he used an elevator, he would touch the operator's shoulder and say, 'Thanks.'"

His Majesty turned over to the hospital all money well-wishers donated in his name, to be used in improving facilities for the benefit of patients, Dr Teerawat said.

He was greatly cheered to hear the crowd outside chanting "Song Phra Charoen". "When the King felt well enough, he often sat at his 16th-floor window in the Chalermphrakiet Building and watched the people coming and going in the hospital compound below.

"And he would express his concern for every one of them," Teerawat said.

"During the massive flooding in 2011 I had to report to him every day about the water levels. He once asked if we all knew how to swim!

"Sometimes he'd go up on the rooftop and we'd have a map prepared showing the traffic lanes in that area of Thonburi. It was always very crowded. There are more than a hundred thousand patients and their relatives coming to the hospital, so the traffic can get very bad.

His Majesty came up with several ideas to help resolve the problem."

The doctors once raised the issue of legal costs soaring when disgruntled patients sued them. "His Majesty told us simply, 'Be humble. Everybody has goodness. Do not look down on anyone.'

"I've passed these noble thoughts on to other medical practitioners as well. What he meant was that, when people respect each other, it creates a relationship of goodwill."

Dr Prasit Watanapa, current dean of the faculty, acknowledged that King Bhumibol's death had caused deep grief among the staff.

"We cried every day for months," he said. "But we knew the best thing for us to do was take good care of his subjects. We must all carry on the royal dedication, especially for the sake of young people, who might not have witnessed his tireless efforts on behalf of the people."

Prasit and Dr Pradit Panchavinnin, head of Siriraj Piyamahakarun Hospital, have been chosen to carry the Royal Urn during the cremation ceremony on October 26.

"Our hands will represent the hands of all 68 million Thais," Prasit said. "When you see us on TV supporting the Royal Urn, please know we represent you. Our hands are your hands."