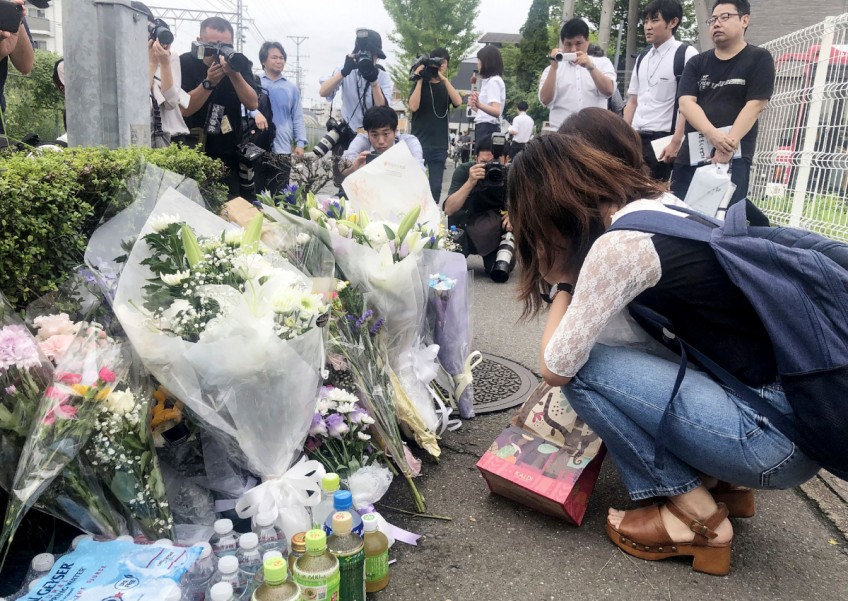 Women cry after placing flowers for victims of a fire which hit the Kyoto Animation studio building on July 18, killing dozens of people, in Kyoto on July 20, 2019.
AFP

Donations to Kyoto Animation Co., which lost 35 people in a devastating arson attack at its No. 1 studio in Kyoto, have so far totaled more than ¥1 billion (S$12.6 million), sources said.

A network of support for the popular animation production company is growing among companies and individuals both at home and abroad.

As of Monday, about ¥965 million from about 48,000 donors had been paid into a bank account solely for donations that the company opened five days prior, in the late afternoon last Wednesday.

Outside Japan, Sentai Filmworks, a US company distributing Japanese anime, launched a crowdfunding donation campaign for Kyoto Animation on July 18, the day of the attack, raising about $2.3 million (S$3.1 million) as of Monday. Donations can be made through the crowdfunding site until the end of July.

Kyoto Animation has said the company will use the donated money to help the deceased victims' families and those injured in the attack as well as for the reconstruction of the company. The firm plans to report the use of the money.

One of the victims in the attack has been named as Ami Kuriki, 30, according to an attorney representing her bereaved family. She hails from Kitanagoya, Aichi Prefecture, and graduated from high school in the prefecture. She was employed by Kyoto Animation in 2014 and worked as a key animator. She was involved in many Kyoto Animation works, including such popular TV anime as "Hibike! Euphonium 2" (Sound! Euphonium2) in 2016 and "Violet Evergarden" in 2018 as well as the animated film "Chunibyo demo Koi ga Shitai! - Take On Me" (Love, Chunibyo and Other Delusions! - Take On Me) in 2018.

Kyoto Animation said Monday digitized data stored on the data server at the studio, including key animation frames, were undamaged by the fire. The company added that the data was the "accomplishment of the deceased."

The fire almost completely burned down the studio and destroyed most of its paper data. As the server was completely enclosed by concrete, it was undamaged by the fire as well as the water from firefighting. The data's detailed contents have not been disclosed, but they may include key frames of works in progress.