Don't videotape a suicide, doctors say – save that life

If you encounter someone standing on a high ledge pondering suicide, don't whip out the phone camera - talk to them, however briefly.

His comments followed the suicide last week of a teenager in Si Sa Ket, whose fatal leap was recorded and the clip shared online.

People need to know how to handle situations like this better, Boonreung said. Offering help should be the common response, not taping the suicide. Making a video is just delivering a second blow to the distraught person and will hurt his family too, he said. 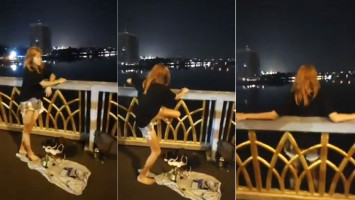 "We should shift from the desire to be the first to record another person's life-or-death moment to the desire to help save a life," Boonreung said.

Anyone can fall victim to stress in a world filled with competition, health issues and varying abilities to cope with difficulties. Some problems aren't easily resolved and the resulting anxiety continues to fester beneath the surface, to the point where suicide can feel like the only option, he said.

"If you encounter someone who looks sad or preoccupied on a high balcony or a bridge guardrail, see it as an expression of desperation and a call for help," Boonreung said.

"You should help by calmly stepping up and talking to them in a friendly way, and smiling as if it were a normal greeting. Don't grab them or pull at them because you could spook them. Just a brief chat, for one minute or five minutes, would be meaningful because it slows the person's thinking down and provides time for them to reconsider. "In most cases, suicide is a heat-of-the-moment impulse, and if the person can be calmed, he might come to his senses and refrain from self-harm."

Saving a life - even if the incident isn't recorded and shared on social media - will stay forever in the hearts of both the person saved and the one who saved him.

Dr Prapas Ukhranan, director of Prasrimahabhodi Psychiatric Hospital in Ubon Ratchathani, also pointed out that sharing photos or videos of suicides could prompt copycat behaviour among other people under stress.

"Ending your life doesn't put an end to the problem," he said. "People might think they've reached a dead end, but it's really just an emotional dead end.

When the mood lifts and they come to their senses, they can see possible solutions - or they can call the Mental Health Department hotline at 1323 for advice, at any time of day."