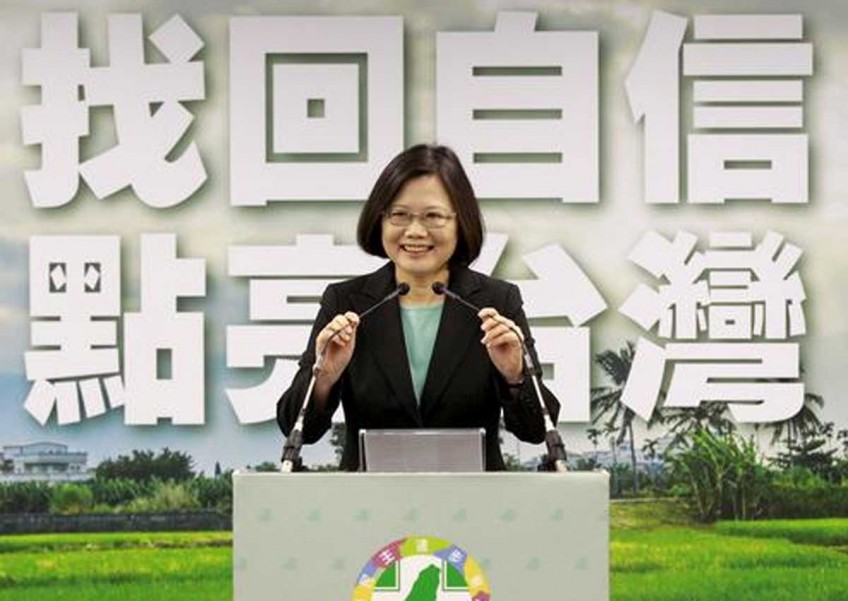 TAIPEI - Democratic Progressive Party (DPP) presidential candidate and Chairwoman Tsai Ing-wen yesterday promised to step up communication and collaboration with the opposition camp if the DPP wins the January elections.

Tsai was addressing concerns that the party could dominate if it takes control of both the administration and parliament - concerns that were highlighted by the results of a recent public opinion poll conducted by the China Times, which showed that 47 per cent of respondents thought there should a strong enough force at the Legislature to counter the DPP.

"We won't take total control," Tsai told supporters at a campaign rally. "We will step up communication with the opposition and parliament, share information ... and rationally discuss policies."

She said that democracy is all about checks and balances, and the most important thing is the ruling party's attitude and how it implements its policies.

Tsai stands a good chance of winning the presidency, having consistently been the front-runner, according to various surveys.

According to a recent China Times' survey - conducted after the ruling Kuomintang (KMT) replaced its presidential candidate - Tsai still has a clear lead.

Tsai's support even shot up to 45.7 per cent when the survey put Tsai and Chu head to head, according to the survey. Under such a scenario - with Soong out of the race and pan-blue support consolidating behind the KMT - Chu's support rose to only 27 per cent, still lagging far behind Tsai.

The KMT is also likely to lose control of the Legislature, although the DPP may not be able to capture a majority of seats.

Chu agreed with survey respondents' concerns about the DPP taking control of both the administration and parliament.

He said the DPP, as an opposition party, is resorting to "violent" measures to stall parliamentary proceedings, and there wouldn't be checks and balances if it became the majority in parliament.

But Chu said he understands that many KMT supporters still bear a grudge against the party for recent controversies.

The KMT recently stripped Legislative Deputy Speaker Hung Hsiu-chu of the party's presidential candidacy and nominated Chu instead, angering many of Hung's supporters.

Chu said his campaign is just starting and believes it will gain momentum after he unveils some policy pledges.

"We will continue to work to unite our original supporters behind us," said Chu. "Many people have yet to declare their support. They still have expectations for us."

Meanwhile, Tsai promised to improve the welfare of Taiwan's indigenous peoples if she is elected president and the DPP takes the majority in parliament,

Taking her campaign to Kaohsiung, where she met with supporters from indigenous groups, Tsai claimed she is one-quarter Paiwanese - one of Taiwan's indigenous peoples.

She said she will do her utmost to solve the problems facing the indigenous peoples.