AFP and The Nation/Asia News Network

MAE SAI, Thailand - Dramatic footage was released early Tuesday of an emaciated and bedraggled Thai youth football team crammed onto a wedge of dry ground surrounded by water deep inside a cave that has held them captive for nine days.

The group, mostly seated and with baggy football shirts pulled over their knees and illuminated by torchlight, asked for food and to leave the cave immediately, according to the video taken late Monday and shared on the official Facebook page of the Thai Navy SEALS.

In the video an unidentified diver, speaking with a British accent, urges the group to stay calm and says "many, many people are coming... we are the first".

The group appeared exhausted, rake thin, sensitive to the light but lucid, with some speaking faltering English to try to communicate with the unidentified diver. 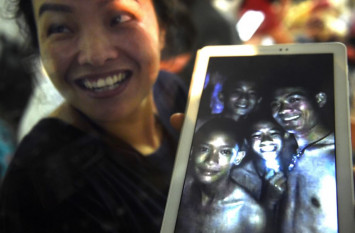 A voice confirms there all 13 people who went missing last Saturday are on the slope of land.

One child asks "what day?" and another says "we are hungry.. shall we go outside?" The diver replies "I know, I understand... no, not today.

"You have been here for 10 days, you are very strong." A rake thin child in the foreground appears to bow in gratitude and says "thank you" as his voice falters.

Following is the transcript of the conversation as released on the Facebook page:

Diver: How many of you?

Boy: [Voice difficult to be heard]

Diver: No, not today. Just two of us. We have to dive.

Boy: [Speaking in Thai]: Who know English, translate for us.

Boy 2: [Speaking in Thai]: Can’t catch up with the words.

Boy: We are hungry.

Diver: I know, I know. I understand. We’ll come.

Boy 1: [In Thai]: They will take our photos first.

Boy: What day you come to help me?

Diver: We come here, we have been diving here for what ... Tomorrow, we’ll help tomorrow. The Navy, Navy SEAL tomorrow. With the food, the doctor and ...

Today, a light? You have a light. We’ll give you more light.

[Sound of somebody falling into water]

Boy: Come up. Brother, rush up.

Boy: I am very happy.

Diver: We are happy too.

Boy: Thank you so much.

Boy: Where you come from?