A Hong Kong driver was on Tuesday jailed for six months for smuggling 12kg of gold worth HK$4.2 million (S$732,000) from mainland China via a cross-border school coach - the first case of its kind in the city.

Fanling Court heard that Koo Chi-ping, 59, was arrested on September 28, 2017 for tucking away 12 gold bars, each weighing one kilogram, inside the school bus which he used to take some 40 primary students from mainland China to attend schools in Hong Kong every day.

Customs officers intercepted Koo's vehicle at Man Kam To Control Point that morning, and found the gold bars concealed in a deposit box annexed to the front door of the vehicle.

The Customs and Excise Department said it was the first gold smuggling case involving a cross-border school bus.

Koo was convicted of importing unmanifested cargo and smuggling articles using an altered structure of a vehicle, and he pleaded not guilty to both counts.

The court heard that he had been laid off after committing the offence, and was forced to retire after struggling with health problems.

In trial, he told the court he had intended to sell the gold bars, which were his own, in Hong Kong for a better price to buy a house in the northern town of Sheung Shui for his wife and daughter, who both lived on the mainland.

He said he did so to ensure that his daughter no longer needed to commute long distance from the mainland to attend school in Hong Kong every day.

Read Also
$310,000 worth of bird's nests hidden in air duct on coach headed for mainland China 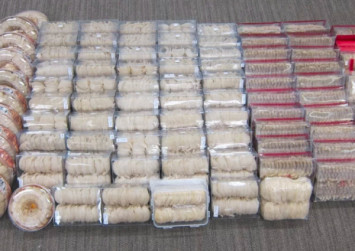 He also said he had concealed the bars in his bus to evade tax. He argued the gold bars were his personal belongings and did not constitute a "cargo" as defined under the Import and Export Ordinance.

Magistrate Daniel Tang Siu-hung rejected his claim, finding it unbelievable that Koo intended to trade his gold, which he had taken hold of for months, on a day when the metal's selling prices were not that high.

He also ruled that it was unreasonable for him to carry all 12 gold bars at once if they were indeed his own.

Importing or exporting unmanifested cargo is punishable by a maximum fine of HK$2 million and imprisonment for seven years.