Duterte shuns presidential Mercedes: All who used it got into trouble 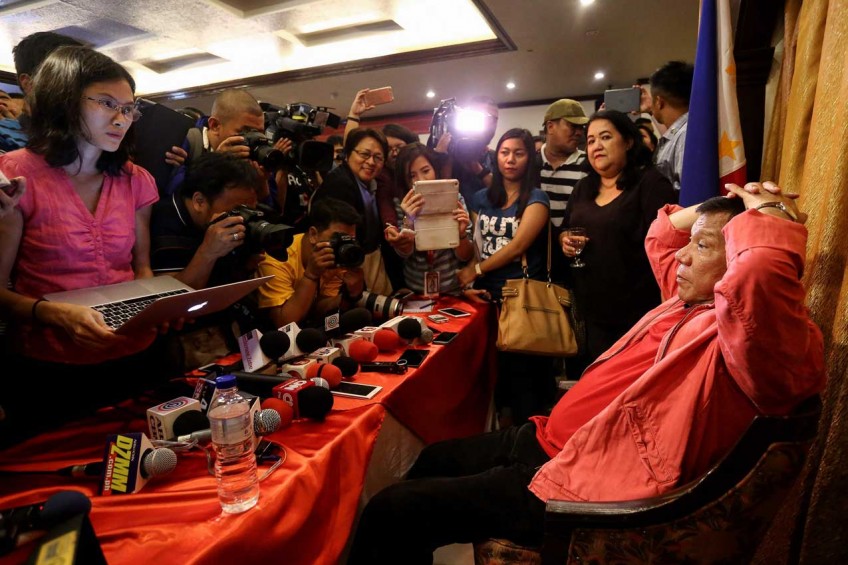 Philippines' president-elect Rodrigo Duterte speaks during a press conference in Davao City, in southern island of Mindanao on May 26, 2016.
AFP

DAVAO CITY – Three days before being sworn in as the country’s new president, Rodrigo Duterte has made up his mind about three matters in the presidency: first he deeply regrets not being close to the people more because of security issues but must follow the Presidential Security Group’s precautions; second, he will never ride the president’s Mercedes-Benz, believing it’s a jinx; and third, and the most important for him, he vowed to whisper to government officials caught committing corruption to just leave, no ifs or buts.

It was the first time for city hall workers to experience being told that they were prohibited from approaching the outgoing mayor.

“You cannot go near me because they (Presidential Security Group members) will stop you. They believe you will kill me,” he said, soliciting laughter from the crowd.

“I also cannot go near you because they will stop me,” he added.

Duterte, who has not attended the regular Monday flag-raising rites for years, said he was always arguing with the PSG men.

“They tell me where to go. We keep on arguing,” he said.

But Duterte said the PSG men were only doing their job.

“They told me that if I get killed during their watch, they will be held responsible,” he said.

Duterte also vowed not to use the vehicles that past presidents used.

“I will not ride in the Mercedes Benz,” he said.

“All those who rode that were either impeached or imprisoned,” he said.

And just like in his recent public announcements, Duterte again bared his government’s campaign against drugs and corruption.

“There will be no corruption,” he pledged.

Addressing his Cabinet members, Duterte said that if any of them got caught involved in corruption, “I will just whisper to you to go.”

“It has to stop. I am hell-bent in stopping corruption,” he said.

“Please remember that you will never get any help from me if you have corruption cases,” he added.