Duterte wants Pacquiao to be next president

Speaking at the 39th birthday bash of Pacquiao at the KCC convention centre here, President Duterte said the pound-for-pound boxing champion was capable of becoming the country's next president. 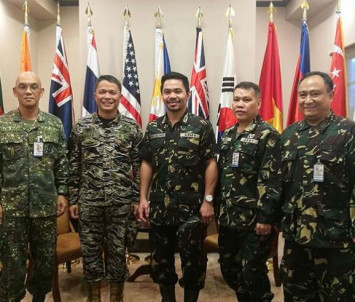 The President said it was his pleasure to be with the senator in sharing happy memories and in the celebration of another milestone in his life.

"You have brought so much pride and joy to our country for being the world champion in the field of boxing," the President said.

"The determination you have shown and the humility embodied in the glorious triumph are worthy of emulation," the President said.

He said he was praying for the good health of Pacquiao and for his family so that the boxing hero would able to enjoy and serve the Filipino people. "Continue to inspire as we lead them towards a more prosperous life," Duterte added.

Recalling how he used to be just another ordinary man roaming the streets of this city, Pacquiao said in his message he did not expect the kind of life he was having now.

"I want to be an inspiration to everyone, especially the poor. Huwag kayong susuko sa buhay. Huwag mawalan ng pag-asa at (huwag) ma-discourage because God has plan for you," Pacquiao said.

The senator's mother, Dionisia, said she was not sure if God would bring them enough money to make Pacquiao win the presidency but she assured her son she would support him.

"I want you to take care of yourself and to keep praying every night," she said.