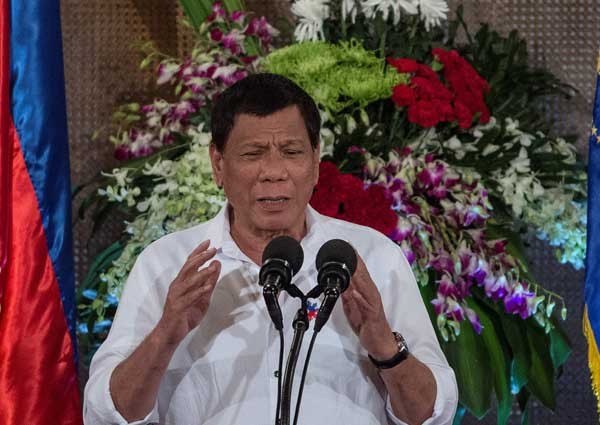 MANILA - With abusive tirades against critics and light-hearted comments about rape, Rodrigo Duterte cemented himself as one of the world's most outspoken leaders during his first year as Philippine president.

As Duterte marks one year in office on Friday, here are some of his more memorable remarks: .

Hitler massacred three million Jews. Now there are three million drug addicts (in the Philippines). I'd be happy to slaughter them.

Duterte in full roar over his quest to end illegal drugs in society.

His crackdown led to police and unknown assailants killing thousands of alleged drug users and addicts. Rights groups warned he may be overseeing a crime against humanity.

After criticism from Jewish groups, Duterte apologised for referring to Nazi leader Adolf Hitler but said he was "emphatic" about wanting to kill millions of addicts.

You must be respectful. Do not just throw away questions and statements. You son of a whore, I will curse you at that forum.

Duterte warns then-US president Barack Obama not to criticise his drug war at a regional summit in Laos that they were about to attend.

In this shifting of political and cultural thing, America has lost it. I mean, I realigned myself in your (China's) ideological flow and maybe I will also go to Russia to talk to (Russian President Vladimir) Putin and tell him that there are three of us against the world: China, Philippines and Russia.

On a trip to Beijing, Duterte articulates his disdain for the United States - the Philippines' mutual defence partner - and fondness for China and Russia.

It is your karma when your churches got destroyed. You know why God destroys the churches? To show you that you are not deserving of his mercy.

Referring to centuries-old Catholic churches in the central Philippines that were damaged in a powerful earthquake in 2013. It was one of many attacks by Duterte on the dominant Roman Catholic Church, which openly criticised the drug war killings.

Look how they slant it! I don't know how but someday, I am not trying to frighten you but someday, karma will come for you.

Duterte threatens the owners of a major newspaper, the Philippine Daily Inquirer, which had critically reported on his anti-drug campaign.

Duterte warns Islamist militants that he can exceed them in savagery.

Leave it to me. I will be imprisoned for you. If you rape three (women), I will say I did it.

Part of a speech to soldiers to boost their morale after imposing martial law across the southern third of the Philippines in an effort to contain rampaging Islamic militants.

Duterte later said his rape remark was "sarcasm", not a joke.

How do you feel?

When your father, the president of the United States, was screwing Lewinsky and the girls in the White House, how did you feel? Did you slam your father?

Duterte responds to Chelsea Clinton, daughter of former US president Bill Clinton after she criticised his rape remark.

Duterte made his reference to Clinton's acknowledged affair with a White House intern, Monica Lewinsky, during a nationally televised speech to naval officers and their children.