Easy to buy guns in Bangkok 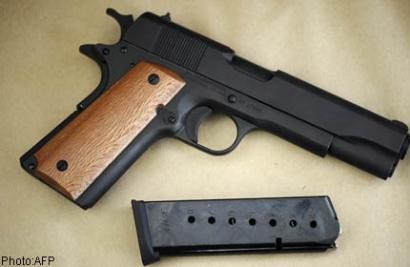 THAILAND - Buying of firearms is easy in Bangkok but the buyers must smuggle the arms into the country on their own, reported China Press.

A Malaysian reporter who managed to get in touch with members of a Thai gun-running syndicate said they do not bother about the identity or background of the buyers.

"They just want to secure a deal. As long as you have the money and find the right middleman, it is easy to buy firearms," said the reporter.

The daily said the reporter met up with a syndicate runner, a man in his 30s, through a middleman in the Thai capital recently.

The meeting took place inside a van where the reporter was shown a catalogue and two real "sample" pistols. The latter was even allowed to take pictures of the firearms without anyproblem.

According to the syndicate member, buyers would normally dismantle the firearms before bringing it to Malaysia via land. A pistol is priced at about RM5,000 (S$1,954).