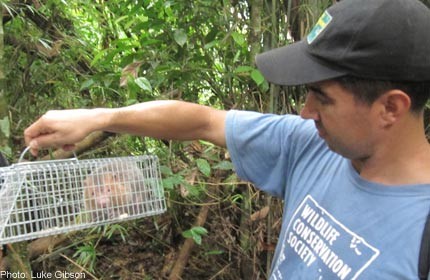 Around the world, tropical forests are being chipped away and fragmented by agriculture, dams and other developments.

But how fast do species disappear from these forest fragments, and how soon must people act to stop extinction?

National University of Singapore (NUS) doctoral student Luke Gibson and his colleagues have been tracking islands in a drowned Thai forest, hoping to answer this question.

The Chiew Larn Reservoir in southern Thailand, midway between Ko Samui and Phuket, is a natural experiment. In 1987, it was formed by damming a river and flooding 165 sq km of forest, producing tiny islands, some smaller than a football field.

Twenty years ago, biologist David Woodruff of the University of California, San Diego, counted the small mammals such as moon rats (shrew-like jungle rats, native to and relatively common in South-east Asian tropical forests) on a dozen selected islands by trapping, tagging and releasing them.

Over the past few years, Mr Gibson and colleagues repeated the work.

They were startled by the sharp crash in the number of small mammal species on the islands.

And after just 25 years, the islands were dominated by Malayan field rats. These animals live in secondary forests and farmland, and were not on the islands when the dam was built, so they must have swum there.

"It was like ecological Armageddon," Mr Gibson said. "Nobody imagined we'd see such catastrophic local extinctions."

Their research was published late last month in the journal Science.

It may be too late to save the native denizens of these tiny Thai islands, but the study sounds a warning to many other countries where forests are increasingly being sacrificed for development, said researchers.

Dr Chong Kwek Yan, an NUS plant biologist, commented that Singapore's forests, too, are fragmented by roads, reservoirs, pipelines and other features, but that the forest patches here are much larger than the ones in the Thailand study.

Still, there are core areas of the Central Catchment Nature Reserve - between Upper Seletar and Upper Peirce, and Upper Peirce and MacRitchie reservoirs, for instance - that serve as "bastions of biodiversity" and where no additional fragmentation should occur.

"But we should not write off small forest fragments, because that is all that remains in many tropical landscapes.

"I think this is a warning of what is going to be increasingly common in the future.