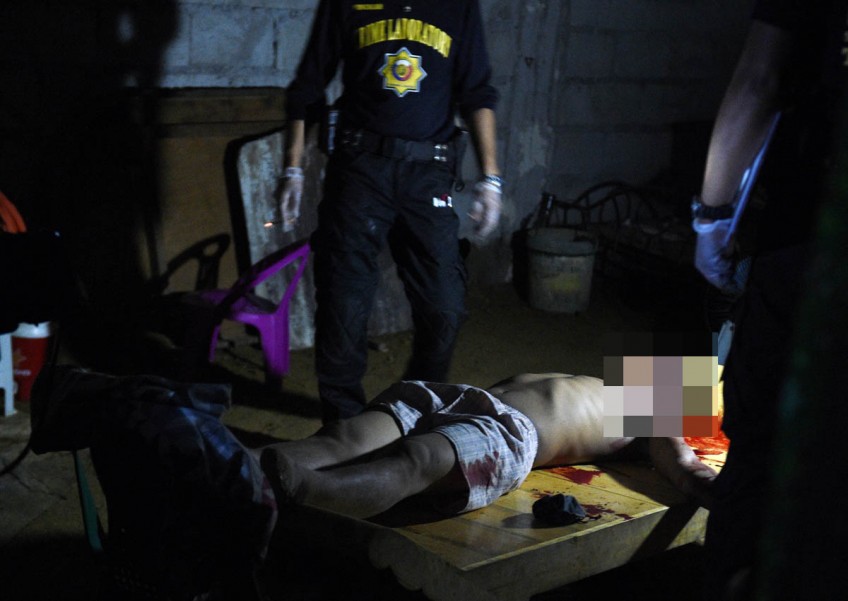 Catholic nuns holding placards during a protest against drug-related extrajudicial killings, in Manila on Dec 10, 2016.
Reuters

While President Rodrigo Duterte's unprecedented crackdown has claimed the lives of 7,000 people, the impacts on their families are the largely untold stories in what rights groups have called a "war on the poor".

Antonio, 43, lost her 19-year-old son - the main breadwinner in the family as a waiter - and her unemployed husband when police conducted a drug raid on their home six months ago and shot the men.

"When they killed my husband and son, they also killed me," Antonio told AFP as she narrated her struggles since their deaths forced her to take on extra work to look after her five remaining children and grandson.

Antonio said she sometimes slept for just two hours a day to fit in her work washing laundry, running errands for neighbours and as a community security officer.

"Sometimes I am so exhausted and my hands are too painful, I have to stop working for one, two days," said Antonio, breaking down in tears.

"Then I have to borrow money from neighbours and we have to scrimp on food." Antonio said her 18-year-old daughter, a psychology student, had to drop out of university to replace her husband as the main caretaker of the younger children.

One of her top concerns is having enough money to buy medicine for her 11-year-old son, who suffers from heart disease.

"I'm angry," she said. "Why did they have to kill my husband and son and leave families like ours to sacrifice?" .

Antonio acknowledged her husband was a drug user but said he had previously reported to authorities as part of a government monitoring programme, and that he was not a trafficker.

She said her son was never into drugs and believed he was shot because he begged police during the raid to spare his father's life.

A police report on the deaths seen by AFP stated officers conducted a drug raid and were forced to shoot after being fired upon first.

Antonio, who asked her real name not be used to avoid potential police retribution, insisted her husband and son did not resist when the officers burst into their home.

Police have reported killing more than 2,500 people in self-defence during the eight months of the drug war.

Rights groups have accused police of systematically making up self-defence claims after killing drug addicts and traffickers. Amnesty International has warned police may have committed crimes against humanity.

Duterte, 71, won presidential elections last year after promising to eradicate drugs in society by killing tens of thousands of people.

Duterte said he would be "happy to slaughter" three million drug addicts, although he and his aides have also insisted police are not being instructed to do anything illegal.

Amnesty said in a February report that the killings were overwhelmingly in poor urban areas, with the slain often male breadwinners.

"The death often puts families in an even more precarious financial position and leaves many relatives embittered, as they see authorities overwhelmingly target the poor," Amnesty said.

Reacting angrily to criticism that his drug war killed mostly poor people, Duterte said this month that small-time drug peddlers "earned so much" and pointed out they were crucial to the trafficking network.

"It does not really matter to me at all if you are the biggest drug distributor or the poorest because you are both conspiring to destroy the people," he said.

The Catholic Church has increasingly become a source of financial and emotional support for relatives of those killed.

Dennis Febre, who is leading a programme to help relatives at a Manila church, said the killing of drug suspects created more problems than they solved.

"Some of those left behind also sell drugs while others go into prostitution because it's a matter of survival," Febre said.

Rose Maninggo, 25, has been given emergency work at one Manila church after losing her husband, a fruit vendor, in a police raid in January.

However she is at a loss over how to raise a five-year-old and a baby when the work, which earns her roughly $10 a day, ends in two months.

The psychological impacts are compounding her struggle.

"I don't feel safe. I dream about my husband in pools of blood asking me for justice," said Maninggo, who also asked her real name not be disclosed.

"I worry about my kids and all I want is to keep them safe." Sally Antonio has another form of mental torture, saying that although she is determined to put food on the table for her children, there is one job she cannot take on.

"My children are growing up without a father," she said.

"It's not just the financial loss but the guidance and care that we miss. That's irreplaceable."