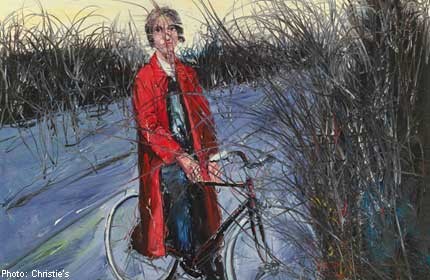 Next month, Christie's will host its first auction in mainland China. It is the first foreign auction house to be allowed to operate independently in China, whose art market value is believed by some to now rival that of the United States.

Although Christie's has long had a presence in Hong Kong, it was previously only allowed to operate in mainland China through a trademark licensing agreement with China's Forever International Auction Company.

Now, with its newly independent status, Christie's is likely to send ripples in the Chinese market as it brings its huge wealth of experience and expertise, not to mention the Christie's juggernaut brand that most non-Chinese art buyers recognise more instantly than that of China's two biggest auctions houses, Beijing Poly and China Guardian.

Indeed, in a market reportedly rife with issues of non-payment, bribery and fake goods, Christie's guarantee of authenticity might give it a leg up over its competitors. While the licence which Christie's received on March 28 does not permit the company to trade in ''cultural relics'', it will still be able to sell everything from contemporary art to fine wine to watches and jewellery.

BT spoke to Jonathan Stone, chairman and international head of Asian Art of Christie's, when he was in town recently.

Q: How did Christie's manage to get the licence to operate in the Chinese art market which has been said to be fairly insular?

Mr Stone: For the last couple of years, we've worked closely with the Shanghai authorities which has been very welcoming toward us. People are generally pleased with it because it signals the opening of China and the internationalisation of the Chinese art market.

Q: There's been a lot of talk that the contemporary Chinese art market is weakening. Do you agree?

Mr Stone: I'm optimistic about the contemporary art market in China. I think there is a perception that it's gotten weaker partly because it grew so phenomenally fast for about five years from 2003/4 onwards. That kind of growth would never have been sustainable. What's happening now is a consolidation of the market . . . it's not growing so precipitously as it has been before, but I still think there is a lot of interest and potential in contemporary art.

Q: Which other areas of the art market are you optimistic about?

Mr Stone: I'm optimistic about most areas of Asian art. For the first half of this year, the sales of Asian art at Christie's were up by almost 30 per cent. And if you look at the longer-term trends, there is significant growth of Asian buyers who account for about a quarter of registrations at our auctions. I think traditional areas of Chinese art are also doing well. Chinese ceramics and traditional paintings, for instance, had a high sold-through rate, which means you have a solid market.

Q: The Chinese art market seems to be facing some serious challenges. According to the crucial annual report by Dr Clare McAndrew (the world's foremost art economist), many of the works sold at auction in Hong Kong and Beijing remain unpaid-for and the percentage of payment defaults is very high in China compared to other countries.

Mr Stone: I think there are a lot of well-publicised incidents generally of non-payment issues in China. But I do think that given the number of lots that Christie's processes, the times when there is a default in payment are remarkably few. Over the last few years, we've also put in processes to ensure that the buyers are bona fide. For instance, we reserve the right to charge deposits to people we think we should charge deposits to, such as new buyers. We've been proactive in addressing this possible problem.

Q: The other major issue in China is fakes. A Forbes report quotes an expert who puts the number of fakes appearing in Chinese auctions and galleries at about 80 per cent.

Mr Stone: There has been a growth in a number of fakes, and that's a slightly bad by-product of the rapid development of the Asian art market. And that's why our specialists are so important to us because it is their job to know. Collections with provenance let you know who owned them decades or centuries ago, which gives them additional value. And that's in addition to the warranty that we would offer.

Q: The other question is the fact that auction houses such as Christie's and Sotheby's do use the prices achieved in other auction houses, such as Beijing Poly, as a gauge for their own prices. However, the same Forbes report suggests that some of Beijing Poly's prices may be inflated through corrupt practices.

Mr Stone: To some extent, we need to be aware of what prices are in the market. But given that each work of ours tends to be quite unique, you have to be make a decision about that specific work of art... Frankly, if something sells for a trillion dollars, that is not going to be the new estimate. The specialists know what is the appropriate and valid estimate, and that too should be something slightly conservative to encourage participation. So you're not going to be too influenced by sky-high prices particularly if there is a question mark over their verity.

Q: What are Christie's plans in China for the next five or 10 years?

Mr Stone: In a few week's time, we will be holding our sale. We will need to take stock of that. But there is a long-term commitment in China - it's not just about having a sale but also about bringing to China all that Christie's does, such as private sales and private selling exhibitions, as well as parallel online sales. At the same time, we will continue to develop our capability in China, and we will continue to do things that are not commercial, like the Christie's Art Forum which brings academics, curators, collectors and experts from the commercial side to discuss topics.