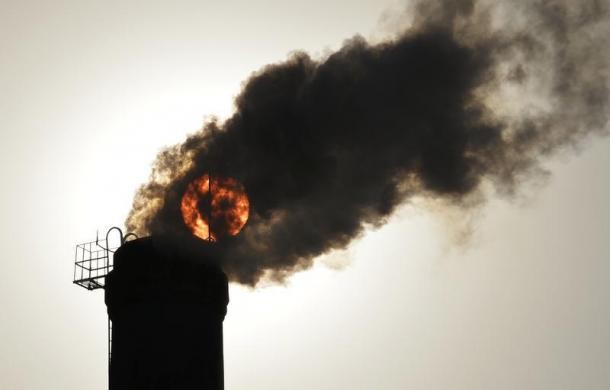 The sun is seen behind smoke billowing from a chimney of a heating plant in Taiyuan, Shanxi province

The costs of modernisation have an environmental face, one that in many regards is well known. The destruction of forests, the extinction of species, the pollution of water courses, and the erosion of the livelihoods and the cultural integrity of minority (tribal) groups have become leitmotifs of rapid economic expansion.

Optimists think - and the rest of us hope - that with growing affluence, awareness and education, society's concern for the environment will grow. Governments, responding to public and media pressure and with a reduced need to pursue development "at all costs", will incorporate stronger, more robust environmental controls and regulation, and so such environmental costs will wane.

The idea is reassuring. Just keep on the growth path to material riches and, with patience, a better environment will follow.

Experience tells us, however, that some environmental challenges, such as access to clean drinking water, are addressed early in the modernisation process. Others, such as dealing with airborne pollutants, tend to get resolved rather later. There are also some environmental challenges which seem to increase with modernisation and so far have shown little evidence of being resolved. The most obvious of these is greenhouse gas emissions.

Greenhouse gas emissions, and to some extent airborne pollutants, remain to be comprehensively addressed in South-east Asia, even in middle income countries.

There are four factors that either question or challenge the assumption that environmental problems will be easily and automatically abated as development proceeds.

First, from a purely economic standpoint, it may be more sensible to deal with environmental problems before they become too serious. This is a key issue with climate change, but it also applies to deforestation, environmental degradation, over-fishing, and pollution. Economists such as Nicholas Stern argue that tackling climate change now will be a good deal cheaper for us all - and, probably, less catastrophic - than dealing with it in 10 years' time.

Second, some environmental processes may be irreversible, reaching a "tipping point" or ecological threshold from which recovery is slow, highly costly, and possibly impossible. Over-fishing, for example, rather than leading to a gradual fall in stocks, may result in their total elimination.

This happened to the Californian sardine fishery in the 1950s and the north-west Atlantic cod fishery in the early 1990s. There are concerns that something similar may occur in the over-fished waters of Indonesia, the Philippines and Thailand.

Last year, Greenpeace published a report, Oceans In The Balance, arguing that "Thailand's marine and fisheries resources are on the verge of collapse". US Food and Agricultural Organisation data shows that wild fishing harvests in Thailand peaked around 1992 and then suffered a steep decline from 2006. Catches of some key fish species, such as longtail tuna and red snapper, have experienced particularly sharp falls.

A third reason to harbour some scepticism about the more optimistic assumption about environmental transition is that growing trade has meant that countries can follow growth strategies in which the environmental costs of economic expansion are "exported" or sent off-shore.

We tend to use the nation-state as the unit of analysis and action. Problems are produced, experienced, governed and addressed at the country scale and through the operation of the nation-state. And yet, increasingly, South-east Asia's development is regional and global. Since the 1990s, Thailand and Vietnam have shown quite substantial net gains in forested area. A logging ban was introduced in Thailand at the end of the 1980s, while in Vietnam forest conservation policies were substantially strengthened in the early 1990s.

These policies partially "solved" the problem of Thailand and Vietnam's rapidly declining and denuding forest resources. On the face of it, their experience seems to lend support to the notion that greater prosperity brings a better environment.

But, at the same time, these national success stories accentuated the self-same problems facing neighbouring Cambodia, Laos and Myanmar. Continuing demand for tropical hard wood in Thailand and Vietnam led to the displacement - or leakage - of logging across international borders. Positive readings of forest transitions in Thailand and Vietnam therefore have to be viewed against - and in direct relation to - more negative transitions elsewhere.

In other words, a cross-national solution that mirrors the cross-border nature of many environmental challenges is needed.

The people who bear the brunt of the environmental costs of over-fishing, damming, sand mining, deforestation and species loss are rarely those who receive the benefits and the opportunities that accrue from the self-same processes of exploitation. Value is taken from one place and redistributed to another. This raises questions not just of environmental sustainability but also of social and spatial justice.

There are positive and uplifting environmental stories from Asia.

There are communities in the Philippines that are protecting their fishing grounds so that stocks can recover. Buddhism is being used by local groups in Thailand to buat (ordain) trees and protect them from cutting. There is also a growing and broad-based environmental awareness in some countries. But simply to wait and hope that things will turn out for the best puts a lot of faith in the operation of the market.