The Everland theme park in Yongin, Gyeonggi Province, has vowed to reinvent itself as an "eco park" by fully utilizing its rich botanical gardens, launching new programs with its infrastructure such as the Speedway motor track.

Spanning 33,000 square meters, it is the biggest botanical garden in the park's history. It boasts some 700 plum trees of over 11 different species, scattered among 10,000 trees and colorful plant life.

The 1-kilometer trail takes 40 minutes to walk through, and the gradually ascending route offer exquisite sights along the way, as if handing out gifts one by one.

The gateway has a display of 30 bonsai plants, with the tiny trees and rocks in the container resembling a miniature forest.

Through bamboo trees and azalea flowers lies the Sky Trail, with white and red plum blossoms hanging about.

Atop the trail is the perfect spot for photos, with plum blossoms and Everland's famed rides -- including the infamous T-Express-- in the background. The Plum Blossom Trail is designed to represent the changing of the four seasons from winter to fall, park officials explained.

Before, Koreans in the central region had to travel south to enjoy the flowers, but with the opening of the trail, they now have an alternative closer to home, they said. The botanical reimagination of Everland is an attempt to rediscover its roots.

Before being rebranded as the nation's largest amusement park Everland in 1996, it had operated for two decades under the name "Yongin Jayeon Nongwon," which roughly translates to "Yongin farmland." True to its name, the park consisted of plant and animal life alongside the rides. 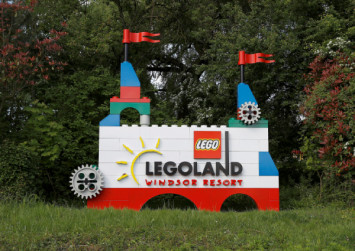 With the name change, the rides and waterpark Caribbean Bay came to overshadow the biological attractions. While animals are featured prominently in the ZooTopia zone with petting zoos, animal shows and a safari attraction, its forest in nearby Sinwon-ri has been forgotten land.

But the park officials said they are launching new projects this year using the rich plant life there, starting with the Forest Camp project that will offer various hands-on programs, concerts and yoga programs in the midst of the greenery.

While Everland had always been more famous for rides, plant life in the park has also attracted festivalgoers. The ongoing annual Tulip Festival has some of the most stunning photo spots in the Seoul area, and will continue until April 28.

The Cherry Blossom Festival on April 5-7 will be short-lived, but glorious, while the Rose Festival will blossom on May 17 to entertain visitors until June 16.

The aforementioned Plum Blossom Trail will be open until May 6, and will reopen in fall.

Despite many Koreans' fascination with cars, motor sports have a relatively small following in the country. Everland officials are hoping to foster the next generation of motor sports enthusiasts with a hands-on programme that gives children a closer look at its Speedway race track. The programme is designed to offer children the chance to feel what it's like to be in motor sports. It includes a chance to meet a former race car driver and a tour of the garage where race cars, including a multimillion-dollar F1 car, are on display.

The highlight is a taxi-driving experience where children can ride in a real race car speeding around the track, peaking at well over 250 kilometers per hour.

Everland officials said they hope to host about 500 students for the new programme, and add other programs to attract more visitors to the Speedway. They have also expanded spectator zones from 3,000 seats to 9,200.