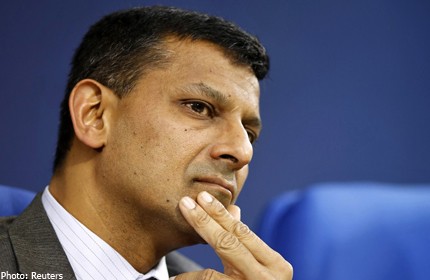 NEW DELHI - India on Tuesday named a former International Monetary Fund chief economist as its new central bank governor as it grapples with a plunging currency and the slowest growth in a decade.

Raghuram Rajan will head the Reserve Bank of India for a three-year term, replacing incumbent D. Subbarao, who retires next month, the finance ministry said.

Rajan did his doctorate at the Massachusetts Institute of Technology and is acclaimed for having predicted the 2008 global financial crisis - two years before it struck.

He takes the central bank reins as India faces testing economic times - hit by a capital flight with investors worried about slow growth, a massive deficit, stalled economic reforms and a slew of graft scandals that have paralysed the political process.

Rajan's appointment came on a day of high financial drama in which the Indian currency touched a fresh record low against the dollar of 61.80 rupees.

The 50-year-old economist is currently the most senior advisor in the finance ministry and has a reputation for strong pro-market views. A statement issued later by the finance ministry said Prime Minister Manmohan Singh had approved the appointment of Rajan to head the nominally independent central bank.

Rajan, as chief economic adviser to the government, has worked closely with Finance Minister P. Chidamabaram, known as another strong proponent of economic reform.

Rajan was also a professor at the University of Chicago's Booth School of Business before taking over as India's chief economic advisor and is author of Fault Lines, an acclaimed account of the subprime financial crisis.

He has enjoyed a high profile since returning from the United States last year to take up the finance ministry post and has worked closely with Chidambaram to try to restore India's sagging reputation with investors.

Rajan, who favours financial deregulation, is expected to bring new ideas to the RBI which the finance ministry believes to be too conservative, according to the Indian media.

Last month, Rajan said "all options were on the table" to stabilise India's currency at the same time as saying defence of the rupee should not suffocate economic growth.

The rupee has come under pressure from India's record current account deficit - the broadest measure of trade, an economy growing at a 10-year low of five per cent and fears of a reduction in US stimulus that have spurred investor flows to emerging markets.