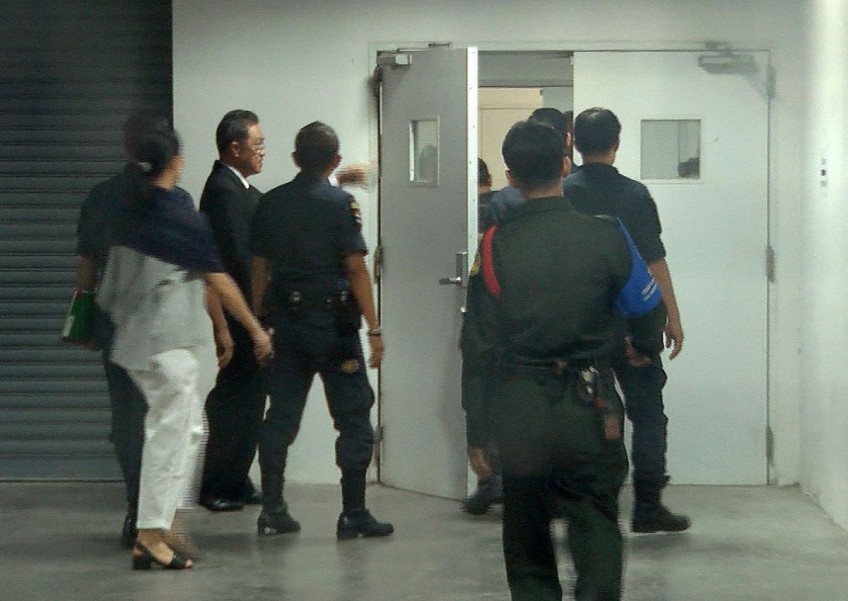 The former civil servant is seen escorted away by officers.
The Nation

The 64-year-old was found guilty by The Supreme Court's Criminal Division for Political Office Holders of deliberately avoiding to mention Bt17.5 million in cash and a Bt3 million Volkswagen in the declaration of his assets on five occasions. He could still appeal under the new constitution. He was detained at Don Muang sub-district court pending the court's decision on whether to grant him bail.

The National Anti-Corruption Commission (NACC) sued Supoj for erroneously declaring his assets during his service as transport permanent secretary in 2009-2011 after the NACC had unanimously found him guilty of "unusual wealth" in 2012.

The NACC froze his assets worth a total of Bt64.7 million, including the Bt17.5 million cash and the Volkswagen. The corruption surfaced after burglars broke into Supoj's house in Bangkok's Wang Thong Lang district on November 12, 2011 while he was at his daughter's wedding.

In the theft complaint, Supoj told police that only Bt5 million cash was missing. However, when several suspects were later arrested, Bt18 million in cash and gold ornaments were retrieved.

The suspects confessed to the theft and claimed to have seen bags bulging with cash inside the house that they could not carry away with them. As Supoj could not explain the source of the assets, the NACC launched an unusual wealth probe, resulting in his indictment and a separate civil lawsuit to confiscate his assets.