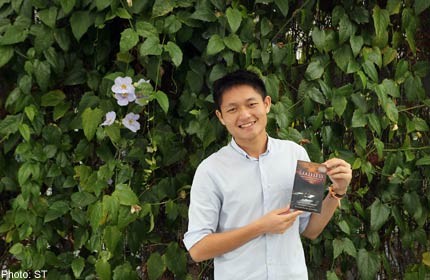 Former refugee Sanva Saephan holding a copy of his book Stateless: Diary Of A Spirited Boy At Napho Camp, which was compiled from diary entries.

Less than three weeks after launching a memoir to raise US$45,000 (S$56,000) to build a primary school back home in Laos, former refugee Sanva Saephan has already exceeded his target.

Around $65,000 has been collected through donations and the sale of some 1,600 copies of his book, which was released on Sept 17.

But the 26-year-old operations analyst at Credit Suisse bank, who moved to Singapore on an Asean scholarship in 2003, is not done in his quest to give his countrymen the same shot at a better life.

He wants to use the almost $10,000 extra to start a scholarship for needy university students back home.

And to further raise awareness, Mr Saephan also plans to invite volunteers from Singapore to help at the new school - a single-storey structure in Ban Nam Tong village in north-western Laos.

"I hope to involve as many Singaporeans as possible in the project. This will allow them to learn about Laos and hopefully they can appreciate life here more, too."

The school, which will have five classrooms, an office and a toilet for 250 students, is expected to be completed in December.

It is a 45-minute drive from his family home in Ban Bokeo village.

Singapore is his "second home", says Mr Saephan, who has applied for permanent residency here.

He studied at Xinmin Secondary School and then Meridian Junior College, before graduating from the Singapore Management University last year.

But from 1992 to 1994, home was the Ban Napho camp in north-east Thailand. It was the second of two camps he spent his early childhood in, after his parents fled across the Mekong River in 1980, fearing persecution by the communist government that had recently come to power.

For the first seven years of his life, Mr Saephan bathed in a river and ate food rations given by the United Nations, before his family was eventually repatriated home.

His story is captured in Stateless: Diary Of A Spirited Boy At Napho Camp, which was compiled from diary entries he started writing while preparing for his O-level examinations in 2005.

For now, Mr Saephan is focused on giving back to society. "Education is an important step in any society's development, especially Laos now. It is a long and winding journey for a country that has so much potential, but someone has to start somewhere to bring about the changes," he says.

The book is available at selected bookstores for $15 (including GST). For more information, e-mail statelessdiary@gmail.com