Growing up as someone who does not conform to traditional gender norms is not easy in Indonesia . Just ask Christine*, a 35 year-old transgender woman in West Java who has been made to undergo conversion therapy no fewer than four times.

While the pseudoscientific practice has been condemned in much of the West, conversion therapy is still widely carried out by faith-based organisations in the world’s largest Muslim majority nation, as well as some commercial entities. Homosexuality is not illegal in Indonesia but rising religious conservatism has fuelled increasing discrimination against the community.

Christine, who grew up in the city of Medan in North Sumatra province, said that she was first subjected to the practice – a type of Islamic exorcism known in Indonesia as ruqya – when she was thirteen.

“I had been feminine since I was seven,” Christine told This Week In Asia . “I was really close to my elder and younger sisters. I played with girl toys and I did chores that girls normally do.”

By sixth grade, she was being bullied in school for being “really girlie”, she said, with schoolmates often shouting slurs at her in Bahasa Indonesia meant specifically for transwomen.

“That’s when my mum asked a Muslim cleric to do a ruqya for me. The cleric told my mum that there was a female jinn inside me,” she said, using the Arabic term for a supernatural spirit. He then gave her some holy water to drink.

When she was 16, Christine underwent ruqya for a second time. On this occasion, the cleric brought a burial shroud and some flowers – the former to be buried as a symbolic gesture so that she could be “reborn” as a male, while the latter were to be used in bathwater to “cleanse” her soul.

It was around this time that Christine began to wear make-up, wigs and high heels in public. In response, and at the urging of family members and neighbours, her mother enrolled Christine in a week-long ruqya boot camp at an Islamic boarding school, seven-hours drive away from the family home.

“All I did was pray five times a day, read the Koran, and take a bath in holy water. At one point we sacrificed a goat and gave the meat to the people who live near the school,” she said, adding that the sacrifice was meant to make her more “pious”. 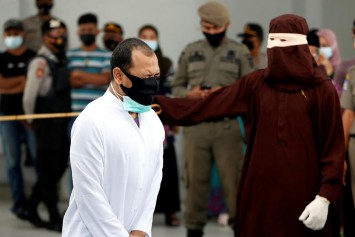 Christine said she felt the programme “disrupted” her mental health, so she quit after three days. Continued exposure to religious conversion therapy also strained her relationship with her mother, prompting Christine to eventually leave for Malaysia where she went on a six-year “soul searching journey” – following one final ruqya session.

Nowadays, Christine works as a trans activist at an organisation in the Indonesian city of Bekasi, and says that she is living proof that interventions designed to “cure” LGBT people do not work. “I don’t believe in ruqya . Trust me, I’ve been through it four times,” she said.

Research by the American Psychological Association in 2007 found that conversion therapy is “unlikely” to change a person’s sexual orientation, while the American Academy of Child Adolescent Psychiatry in 2018 said that such therapies are “harmful” and “should not be part of any behavioural health treatment of children and adolescents”.

While faith-based “treatments” for LGBT people, like ruqya, are commonplace in Indonesia, the practice came under a fresh spotlight recently after a website emerged advertising a range of such services, including “corrective rape”, for a fee.

In an emailed response to a This Week In Asia request for more information before it was shut down, those behind the site said they were based in Jakarta and Bali, and quoted the following prices for treatment: US$20 (S$27) for three praying session; US$70 for up to five sessions of electric shock therapy; US$100 for four ruqya sessions; and US$200 for “sex therapy” – or corrective rape.

“[Prices] depend on the severity of your disease,” the response said. “Please note that we only cater to those with serious requests.”

Before its social media presence was wiped, an account associated with the website reportedly messaged some Indonesian LGBT activists on Instagram. A Facebook page with the same “Terapi Konversi” name, which mostly shared Koran quotes and messages extolling the importance of repentance, was liked some 2,600 times before it too was closed.

Despite all traces of the TerapiKonversi.co website being removed from the internet, no further action has been taken by Indonesian authorities against the operators of the service.

Rights activists, who first recorded the website’s existence in February, called it “dehumanising” and said it was yet another example of discrimination against Indonesia’s LGBT community. Homosexuality is not illegal in Indonesia, but anti-LGBT rhetoric and persecution have spiked in recent years, driven by the rise of religious fundamentalism in the country, activists said.

Andreas Harsono of Human Rights Watch Indonesia said it was “disgusting” that rape was being offered as a service “in the name of a religious therapy”.

“It is simply a scam. I hope no one has been taken in by it. The police should investigate this group,” he said. “We have documented how officials’ biased and untrue statements about lesbian, gay, bisexual, and transgender people provided social sanction for harassment and violence against LGBT Indonesians, and even death threats by militant Islamists.”

Harsono said it did not help that state institutions like the National Broadcasting Commission and National Child Protection Commission had issued censorship directives banning information and broadcasts that portrayed the lives of LGBT people as normal.

“That combination of discriminatory rhetoric and policy decisions has harmed the physical security and right to free expression of LGBT people across Indonesia,” he added.

Pelangi Nusantara, an Indonesian LGBT rights organisation, said in a statement its members were “very angry and disappointed that such dehumanising practices [as ‘sex therapy’] are peddled as a cure for homosexuality”.

“These local businesses are given free rein to operate in Indonesia while civil authorities and religious leaders turn a blind eye to how extreme such persecutions can be,” it said.

Christine, the transwoman in Bekasi, said that while the “Terapi Konversi” website may have been taken down, conversion therapies are still widely practised in Indonesia – particularly in the regions that are religiously conservative. She said education of LGBT Indonesians’ family members and communities was key, if others are to be spared the traumatic experiences she was made to endure.

“I hope more people will advocate against conversion therapy and educate the families of LGBT people about gender diversity. Authorities also need to be educated since they still think that people with penises will have to act like men,” she said.