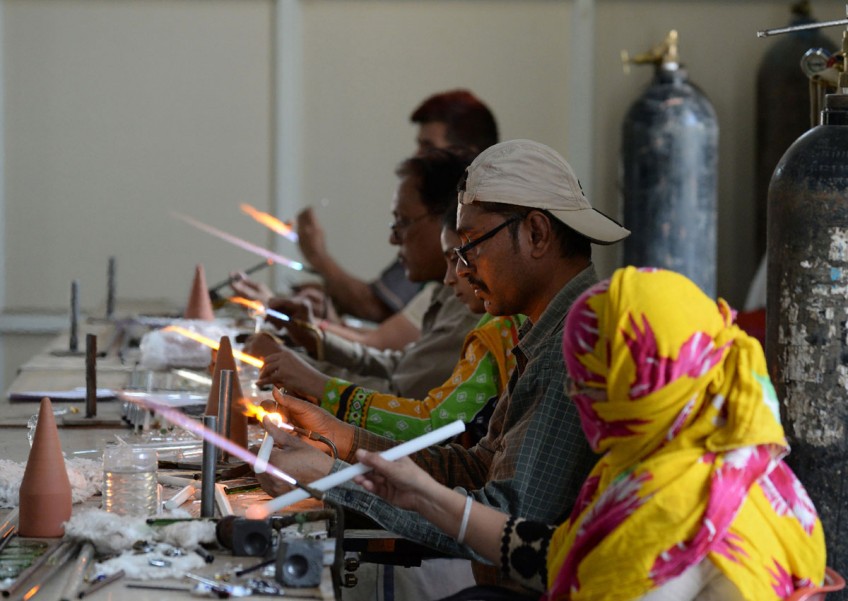 Firozabad (India) - Hanuman Prasad Garg doesn't blame rising fuel prices or pressure from cheap knock-offs for the slow demise of the glass industry where Indian artisans have forged bangles for centuries. He blames the Taj Mahal.

The artisans were banned from burning coal and forced to use costly gas to fuel their furnaces instead -- and yet two decades on the Taj is still losing its lustre.

"Because of the Taj Mahal, the entire industry is suffering," said Garg, president of a glass industry association in Firozabad, roughly 35 kilometres (22 miles) from the 360-year-old monument.

Inside the blazing-hot workshops dotting the district, the Taj is a sore point for many of the craftsmen toiling over thousand-degree furnaces to fashion the glittering bangles that sell for pennies across India.

Their industry dates back almost as far as the Mughal-era mausoleum itself.

But many factories have closed or downsized considerably as the price of natural gas has steadily climbed in recent years, throwing generations of glass artisans onto the scrap heap.

Now authorities are considering closing the historic district for good.

Crouched over a flame in his tiny workshop, Zafar Ahmad skillfully carved a delicate bird from a searing hot blob of molten glass as he fretted about his family-run business.

"I have been making glass items since I was 10 years old. This is the only thing I know. My entire household is involved in this work," he told AFP, using a naked flame to tease the glass into form.

"But still it is so difficult to survive. I can't even afford sending my four children to decent schools. I can't imagine what will happen to them if God forbid I am out of work," he added.

Artisans earn little more than 300 rupees ($5) per day, despite the extreme conditions.

Competition from cheaper plastic and metal bangles has also made it harder for those crafting glass by hand, a costlier and more time consuming process.

A Supreme Court ruling in 1999, giving Firozabad two years to retrofit their factories with gas instead of coal, has gradually eroded their razor-thin margins, pushing many to the wall.

Garg said pollution had come down, but the phasing out of gas subsidies had seen input costs climb year on year.

"Ours is a labour-intensive industry and everyone suffers on account of this," he said.

Despite the interventions, the Taj is still yellowing, prompting authorities to search for stricter rules on potential pollutants in the area.

Other coal-powered industries in districts closest to the mausoleum have also been shut down, while motor vehicles are not allowed within a 500 metre radius of it.

Mud packs have been applied periodically to draw the stain from the stone, but authorities have struggled to stop the discolouration.

A 2015 joint study by Indian and US researchers concluded smog from burning fossil fuels, dung and garbage in and around Agra city was tarnishing the marble.

The artisans of Firozabad feel their days are numbered, and face the very real threat of being turfed out of their homes and businesses for good.

The National Green Tribunal, India's federal environment court, is considering shifting the entire industry elsewhere, and has ordered samples be taken from the furnaces of Firozabad to test for pollutants.

To offset the disruption, the government is trying to bring artisans like Ahmad into the modern era, teaching them to sell their goods online and run stalls at state-run craft fairs in major centres.

Shahbaz Ali, chairman of the National Minorities Development and Finance Corporation, said: "No one can take away their talent. They have rich traditional knowledge, we are just polishing it."