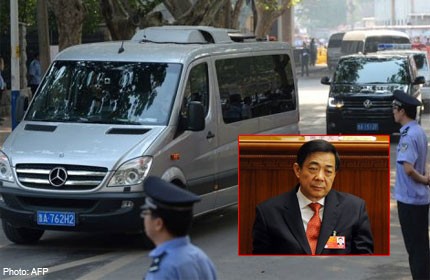 The convoy believed to be carrying disgraced politician Bo Xilai arrives at court in Jinan.

"The chief judge announces the trial has begun and has called the defendant Bo Xilai to the court," the Jinan Intermediate People's Court said on its verified microblog account, adding that Bo was brought in by court police.

The case was "extremely complicated", it quoted chief judge Wang Xuguang as saying.

The galleries were packed, the court said, with five relatives of the accused present, two assistants, 19 journalists and 84 members of the public.

Once one of communist China's highest-flying politicians, Bo faces charges of bribery, embezzlement and abuse of power, the official Xinhua news agency reported.

He headed the southwestern megacity of Chongqing and belonged to the 25-member Politburo - with a shot at joining its Standing Committee, China's highest-ruling body, last November.

But his dramatic downfall began in November 2011 when British businessman Neil Heywood was found dead in a hilltop hotel room in a scandal that saw Bo's police chief flee to a US consulate and his wife, Gu Kailai, convicted of murder.

Scores of blue-uniformed police blocked the roads around the front and side entrances of the court early Thursday.

Hundreds of passersby stopped to watch, some capturing the scene on their smartphones, as cars, buses and ambulances occasionally drove into the court.

One Bo supporter surnamed He, who worked part of the year in Chongqing, said he flew in the night before and had met many others from the city.

The 51-year-old said he had not told his family he was coming to the trial, reflecting the sensitivity of the situation.

Yet he openly praised the fallen leader in front of a row of police blocking the street.

"I bow to you," he called out several times while snapping photos as a convoy of buses drove past.

"If this were a matter of justice, would they be so nervous?" he said, referring to the massive police presence.

He ranked Bo alongside respected Chinese leaders Deng Xiaoping and Zhu Rongji, saying "his governance was too great" and "the whole world should learn from him".

"It doesn't matter how he is sentenced, it matters how history is written," he added.

Gu was last year given a suspended death sentence - normally commuted to life imprisonment - for Heywood's murder and police chief Wang Lijun got 15 years in jail for his role in covering it up.

Bo's own long-awaited trial is expected to proceed swiftly, with a guilty verdict all but certain and the sentence believed to have been decided beforehand.

The ruling Communist Party is touting the trial as proof of its intent to crack down on corruption but the proceedings remain sensitive.

Analysts say Bo's revival of the trappings of Mao-era China - including mass concerts singing "red" songs - while party chief in Chongqing alarmed sections of China's top leadership, who saw the campaigns as a brash return to a bygone era of strongman rule.