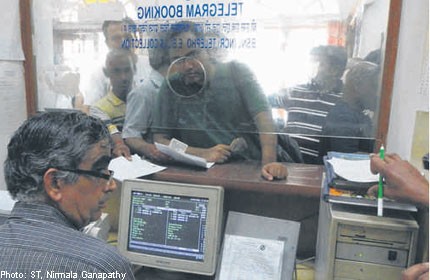 An officer at the Central Telegraph Office in New Delhi’s Connaught Place attending to customers who came to send their last telegrams yesterday. For decades, the service was indispensable for communication.

NEW DELHI - It was ta-ta to the "taar", as the telegram is called in India, and there was no stopping the crowds vying to send out a piece of history on the last day of the 162-year-old service.

Thousands yesterday converged on telegraph offices across the country - a rare sight in an era of mobile phones and social media - for a chance to be a part of history, paying 28 rupees (59 Singapore cents) for the first 30 words of a telegram.

In Delhi, photographer John Edwards explained the role the telegram played in his life as he joined the long queue at the Central Telegraph Office.

"I'm emotionally attached to the telegram," said the former Air Force officer, now 48, who had wooed his then girlfriend, now his wife, by telegram when he was posted to remote border areas.

"It was the fastest way to communicate in those days," he said.

Given how the service helped bring the couple together, it was perhaps fitting that both figured in the message he sent.

Addressed to Geeta, his wife of 19 years, it read: "Let us bid a big farewell to the telegram."

Another person who will miss the service is Mrs Somyata Bansal, 58. She said: "I sent a telegram to my husband when our son was born." Her last telegram, which she sent yesterday, was to wish her 85-year-old mother happy birthday.

At its peak in the 1980s, the Delhi telegraph office sent out more than 7,000 telegrams daily. In recent years, however, the flood of messages had dwindled to a trickle of 100 telegrams on average each day.

In the past few days, the telegram service regained some of its past glory as people rushed to send telegrams, many of them doing so for the first time.

"This is the last telegram. Keep it as a souvenir," read one telegram.

An aunt's message to her niece read: "I love you, my doll. You might not see a telegram as it is closing. Preserve it safely."

Telegram messengers dressed in khaki uniforms were a common sight in India in the years before and after it gained independence from the British in 1947. They began to vanish in the past two decades as the economy was liberalised and the telecom revolution swept across India. There are now 867 million mobile phone users in this country of 1.2 billion people. As the telegram service became less popular, its 45,000 offices got cut to the current 75.

Among those who lamented the end of the telegram service were its hundreds of employees.

"Communication of a death, birth and everything else was dependent on the telegram. These days, you just pick up the phone," said chief telegraph master Raj Dev Ram, 57, who joined the office 35 years ago. "It shouldn't have been shut down. There is so much history," he added.

All its staff will be transferred to other departments.

India had the largest telegram service in the world. Set up by the British in 1850 to better manage the subcontinent, it would later be used widely by the Indian independence movement led by Mahatma Gandhi to rally support for protests and rallies. After India became independent in 1947, the telegram became even more indispensable. In those days, people waited years to get a telephone connection and if they wanted to call someone in another state or overseas, they had to first book a call and then wait for the callback. Telegrams were still being used in their final days by the government to inform people who had received a top civilian award and as a message of record for official purposes.

Telegraphist Usha Gautam, 60, is sad to see the service go, just two months before she retires.

"Since the 1980s, there has been no recruitment in our office. Every month, we would hold a party for a colleague who was retiring. But there cannot be a party for the death of the telegram.

"I feel like I've lost a family member today," she said.