A woman in Kathmandu, Nepal, holds on to much-needed oxygen cylinders for a Covid-19 patient after refilling them at a factory.

While global attention has been focused on India’s runaway second Covid-19 wave, a surge in cases has pushed neighbouring Nepal ’s health care system to the breaking point, with intensive care unit wards jammed and hospitals clamouring for oxygen.

Many medical facilities in the impoverished country of 30 million are refusing admission to Covid-19 patients as beds and drugs are also in short supply, while doctors fear Nepal’s outbreak is on a worse trajectory than India’s.

“Our medical infrastructure is in crisis. The oxygen supply-demand gap is huge. We also have no more vaccines,” Dr Samir Kumar Adhikari, the health ministry’s chief spokesperson, said in an interview.

When the second wave engulfed India and large swathes of the country went into lockdown, migrant Nepali workers began returning home, bringing with them the fast-spreading B.1.617.2 variant that was first found in India.

That variant now comprises nearly 100 per cent of Nepal’s cases, according to the health ministry. As many as 400,000 more workers are expected to return in the coming weeks, with only symptomatic returnees being screened due to a shortage of testing equipment.

Nepalis, like their Indian neighbours, had become complacent about prevention after a milder-than-expected first wave led them to believe Covid-19 was in retreat.

“People got extremely careless,” said Dr Retiesh Kanojia, a doctor working near the Nepal-India border. There were big weddings, religious festivals and political rallies, many held by Nepal’s embattled Prime Minister K.P. Sharma Oli, who has been accused by critics of playing power politics while ignoring the exploding caseload.

This combination of factors has proved catastrophic. On Tuesday, Nepal’s new cases reported in the previous 24 hours stood at 8,136, up more than 65 times from two months ago, according to government data.

There had been 196 deaths in that 24-hour time frame, up from the daily total of around five reported early last month.

Nepal has recorded more than 472,000 cases and some 5,400 deaths, though experts believe case numbers and mortality figures are massively undercounted.

Meanwhile, Nepal’s positivity rate has been running near 50 per cent, meaning half the people tested have Covid-19. “People are alarmed when it’s over 15 per cent. This rate’s huge,” Sara Beysolow Nyanti, the United Nations ’ Nepal resident coordinator, said.

On top of this, the number of people in isolation has crossed 114,500 and is still growing steadily, which doctors say means the daily death toll will keep mounting as cases progress.

“The first week of Covid-19, symptoms are usually mild, but the next week, things can turn serious and patients may need oxygen … and we can’t fulfil their oxygen needs,” health ministry spokesperson Adhikari warned. 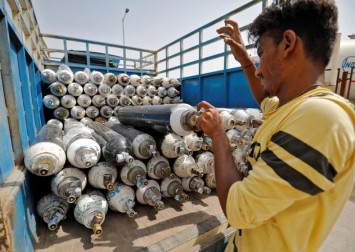 The government has capped the number of oxygen cylinders per hospital in a bid to ensure fair distribution, prompting many to reject new patients.

“We have enough manpower such as doctors and nurses to take care of patients but not enough oxygen supply,” the private Om Hospital in Kathmandu said in a notice. Pun said his state-run hospital was just about managing but “every day we’re scared our oxygen may soon be finishing”.

Normally, Nepal would turn to India for oxygen, as it does for most key supplies – but its neighbour has none to spare.

Adhikari said India had managed to send “two to three” oxygen tankers and 900 cylinders by road, but that is nowhere near sufficient. “India’s in crisis and it’s passing the crisis to us,” he added.

Beijing, which has long been cultivating relations with Kathmandu, is stepping into the breach. 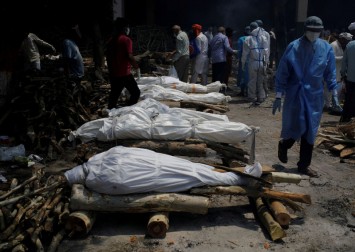 “[China seeking to fill] in the gap in terms of medical assistance left by India is an inevitable situation … This similar unfolding of events will be felt in all the neighbouring countries of India barring Bhutan,” said Samar S.J.B. Rana, a researcher at Nepal’s Institute for Integrated Development Studies.

Still, India’s need to focus on its own requirements creates a situation that can’t be resolved easily. China gave Nepal 800,000 Sinopharm doses in March, but its vaccine-producing ability remains below that of India’s, and it also needs to vaccinate its own 1.4 billion people.

Xinhua reported that 25,000 empty cylinders bought by private firms in Nepal arrived at a border customs point on Monday, along with other Chinese-made medical supplies including personal protective equipment and ICU beds.

China’s ambassador to Nepal, Hou Yanqi, on May 11 tweeted that Beijing had donated 400 oxygen cylinders and 10 ventilators to Kathmandu, along with more than 170 oxygen concentrators donated by Chinese company Hongshi Shivam Cement.

But as Adhikari points out, there are enormous logistical difficulties in the long overland journey to transport oxygen to Nepal from China in the north. Filled oxygen cylinders are considered dangerous goods due to the risk of explosion, which is why Nepal needs to source its oxygen from India – which borders Nepal to the east, west and south – or produce its own.

“We can’t save all the people in Nepal by airlifting oxygen from China. We have to arrange for regular supply by practical means,” Adhikari said. 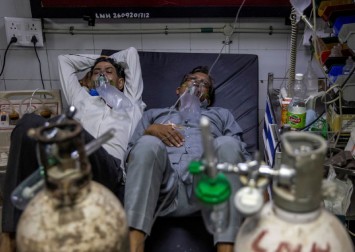 Prime Minister Oli – who is pro-India, and has been fighting for his political life after losing a parliament trust vote this month – is still hoping the Indian government will come through with oxygen and medical supplies. Indeed, any Indian medical support could bolster bilateral ties that sank to a low in 2015 when India unofficially imposed a blockade on the country.

UN coordinator Nyanti – who has been visiting overflowing hospitals where patients are being treated in corridors and courtyards, in scenes that “break my heart” – said she believed Nepal’s plight is being overshadowed by India, which this week became the second country after the United States to report more than 25 million infections.

“[Nepal is] getting lost in the whole global conversation [about Covid-19 aid],” she said. “You’re looking at the poorest of the poor, the most marginalised.”

Nyanti points out that while the huge infection numbers coming out of India are drawing attention, its health care system – one of the worst in the world in terms of per capita spending – is still more robust than Nepal’s.

In the longer term, however, the only way to stop successive waves in Nepal is through a combination of public health measures and vaccines – which, Nyanti said, richer countries should step up to the plate to provide. “It’s basic humanity,” she said.