Fed up with husband's disastrous shopping efforts, woman creates idiot-proof list for him 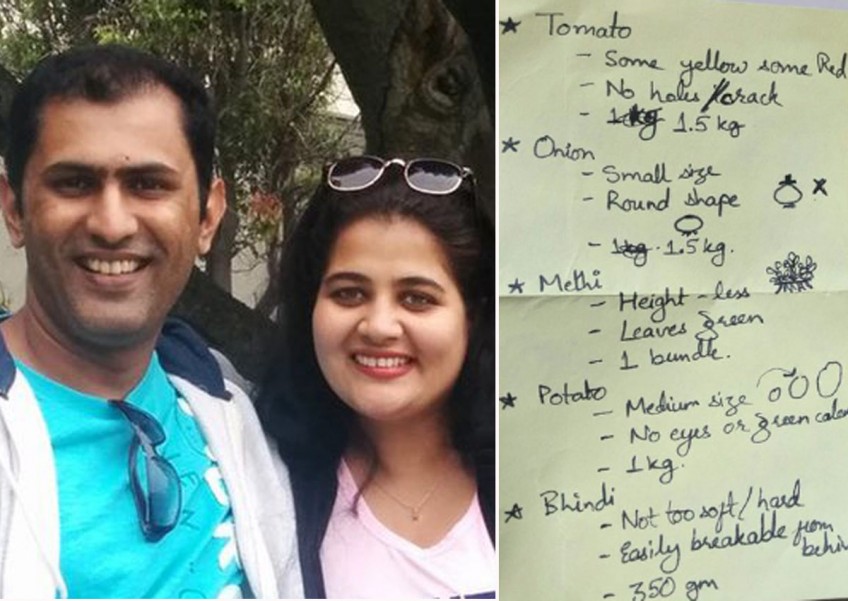 Here's how one woman keeps her marriage happy after weekly fights over vegetables that are already spoiled or odd in shape.

Fed up with her husband for not buying the exact type and quality of vegetables she wanted, an Indian woman decided to come up with an idiot-proof shopping list for him.

The hand-written note got improved along the way as the hubby wanted her to fill in details like a vegetable's shape, colour and look so that he would not make those pathetic mistakes again - like potatoes with green spots and many eyes and leafy veggies with many holes.

Proud of her achievement, IT specialist Era Golwalkar, 29, tweeted an image of her latest 'husband-proof' shopping list to share with other couples how they could communicate their needs better.

The list, with drawings showing perfect and imperfect vegetables and their different sizes, has become an Internet hit after it was tweeted on Sept 23.

The picture of the list, scribbled on notebook pages, has been retweeted more than 1,000 times.

@eralondhe you should become product manager at some reputed company. Superb job!!!

Many social media users in India, where most husbands do not run such errands for their wives, praised her attention to details like telling her husband what to look out for and what to avoid. One user even likened her instructions to a "scientific formula" for shopping correctly.

One netizen said: "I'm going to start doing this because as much as I love him I don't trust my fiance with grocery shopping."

OMG you leave no room for error! I like it that this is from bhajiwala, not some supermarket or online store. #GoldenGirlEra

Mrs Golwalkar told BBC she was driven to create the note for her husband Gaurav to "solve a weekly problem" after describing her husband's first attempt at grocery shopping as an "epic fail".

"When I first sent him to purchase vegetables, it was an epic fail and an argument ensued between us. The second time was no better. Nor was the third," she told the BBC.

His inexperience in the kitchen was taken advantage of when he was sold spoilt and inferior produce without him realising.

She told BBC: "After Gaurav and I got married three years ago we decided to split the household chores. Gaurav was very supportive and was ready to learn cooking (which is not common for a lot of men in India). But there was one problem. I wasn't aware of back then - he had no experience with anything related to cooking.

Now Gaurav is able pick the correct items by following her list and their rows have since stopped.

Soon, he might not even need to rely on a detailed list, if he's still shopping for the same things.