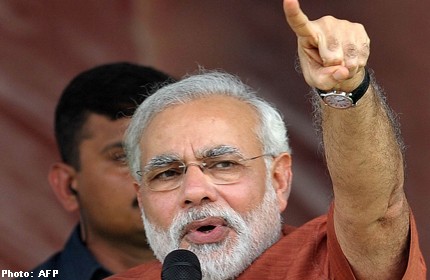 NEW DELHI - Indian prime ministerial contender Narendra Modi chose a stronghold of the rival Congress party to kick off his party's campaign with a fiery speech to make inroads into southern India.

The speech in Andhra Pradesh state was the first in south India by the leader of the main opposition party, the Bharatiya Janata Party (BJP), since he became election committee chief.

It was aimed at the youth.

Analysts say it was a good move by the popular but controversial chief minister of the western Gujarat state to hold a rally in the south as he tries to gain acceptance as a national leader.

The BJP is hoping to increase its presence in the country's fourth-largest state, where Congress won 33 of the 42 parliamentary seats in the 2009 elections.

A decision to carve India's newest state of Telangana out of Andhra Pradesh is seen as a move by the ruling Congress to strengthen its clout as more than half of the 42 seats will be in the new state. But politics in the state is in turmoil and the BJP hopes it can sneak in a few wins.

Perhaps as an indication of his appeal, some 70,000 young people between the ages of 20 and 45 gathered to listen to Mr Modi on Sunday, after paying five rupees (S$0.10) as an entry fee - unusual in a country where it is common for political parties to give away goodies or money to gather crowds.

The crowd cheered as he opened his speech with a few words in the local Telugu language.

"The rally is a message to north India that Mr Modi can attract the crowds in south India too," said Professor Sudhir Panwar, of Lucknow University.

The choice of Hyderabad city as the venue was particularly interesting, observers said.

The rally targeted youth, and the state capital - also an Internet technology and education hub - has a sizeable number of young professionals and students.

In the country of 1.2 billion, half the population is below the age of 35, with both the BJP and Congress hoping to woo young voters.

Mr Modi has been trying to attract the youth vote after becoming the leading contender in the BJP following his third election win in Gujarat last December.

"Youth (are) worried about India. I am worried about the youth," he said at Sunday's rally, adding that the federal government should be focusing on skills development.

While Mr Modi has made a good start in the south, analysts say the BJP needs to do more to make any inroads there.

"It is a good beginning. But there is no BJP presence in the south... and one meeting will not change that," said Dr N. Bhaskara Rao, chairman of the Centre for Media Studies.

Prof Panwar said: "The BJP needs more organisational work in the south with the Congress stronger in states like Andhra Pradesh."

But he lagged behind Congress vice-president Rahul Gandhi in south India, with only 17 per cent in support against 37 per cent favouring his nearest rival.

The BJP is also hoping to tie up with regional parties to form a coalition to take on Congress.