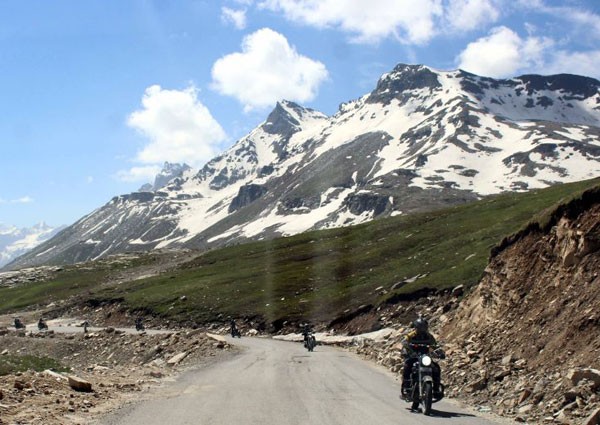 The tussle between biker associations of Leh-Ladakh in Jammu and Kashmir and Manali in Himachal Pradesh is taking a toll on tourism activities on one of the world's top three adventure tourism routes.

The ongoing tussle between the two associations allegedly started on 3 June when a group of bikers from Manali was stopped in Manali.

The bike keys of the tourists were allegedly snatched from them and were allegedly held hostage for few days before they told to return by other means of transportation.

Some of the tourists at Leh-Ladakh even complained of misbehaviour by the locals.

This led to further escalation of tension between the two as both of them accused each other of damaging bikes and misbehaving with tourists.

"We continued peaceful negotiations with our counterparts in Leh but there seems to be some miscommunication that led to escalation of tussle," Anurag Sood, president, Manali Bikers Association told The Statesman.

Sood said that they were demanding peaceful environment for tourism activities on the route which is famous among tourists from across the world.

"Our bikes are still stranded in Leh-Ladakh as they aren't allowing them to be transported by trucks too as was agreed upon," he said.

"We only want the freedom to movement in any part of the region as we have allowed them so that tourism or tourists doesn't suffer on this adventurous route," he added.

Tashi Chotak, president, All Ladakh Bikers Association Cooperative Limited said on 6 June, 35 bikers from Leh were reportedly kept hostage for five days in Manali and now they will not allow the Himachali bikers to enter Ladakh.

Leh bikers will also pick up their clients at Sarchu on Jammu and Kashmir-Himachal border in Ladakh and the decision has been conveyed bikers of Manali also, he said, adding the bikes were also damaged by them.

Now, both the association has approached the district administration in the respective areas for amicable solution on the same.

But the bikers are now at the receiving end who waits for the restoration of the vehicular traffic on the route to enjoy celestial beauty of the mighty Himalayas.

It is worthwhile to mention here that the tussle between Leh-Ladakh and Manali bikers started in 2013 when they were stopped from visiting Penguong, Nubra and Dungla area of Ladakh.

The issue, however, was resolved as the Manali bikers agreed to not to visit these areas.