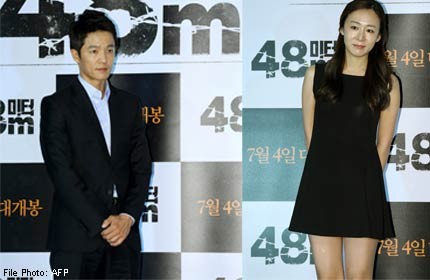 SOUTH KOREA - He counted the bullets, one by one, as he pushed them into the cartridge, making sure they totaled 30.

"I was going to leave one bullet for myself in case I got caught," said Ahn Chan-il, a former North Korean soldier who fled the communist state in 1979 and the co-producer of a new film on defectors.

Before crossing the border, he left a personal letter in his barracks for Kim Il-sung, then North Korean leader, begging for his family's safety.

When Ahn reached the South however, every family member minus one sister was labelled a state traitor, and subsequently sent to North Korean gulags. They are all dead now, Ahn was told a few years later.

Today, he is a North Korean studies professor at Chung-Ang University in Seoul and works as a North Korea human rights activist. Ahn's most recent project is the production of "48M" which recounts the ordeals of North Korean escapees.

The film, released at local theatres on July 4, is named after the shortest width of the Yalu River which runs along the border between North Korea and China. It puts together in its storyline over 100 first-hand accounts of North Korean refugees.

The 48-meter pass on the Yalu attracts starving North Koreans who dare to venture into the knee-deep, icy river, avoiding the eyes of North Korean border guards who lie camouflaged behind the riverbanks, waiting to machine-gun unauthorized crossers on sight.

"I was lucky in 1979. I was already a trained soldier specialising in infiltrating minefields and dodging border patrols. And I got to go directly over the border into Seoul, not over a river. These refugees are different. They are starving people who have to cross a freezing river barefoot while trained killers shoot at them in the open," the professor said in an interview with The Korea Herald.

Testimonies used in the film include eyewitness accounts of the shooting of an entire family as they attempted to sneak across the frozen river, a child getting shot while chasing after a pet dog that strayed over the border into China, and a group whose escape plans were leaked to border guards and subsequently ambushed.

They fled not because of political discontent against the Kim Jong-un regime, but because of everyday problems, like feeding a starving son, or finding medicine for an ailing father.

"This movie is not about ideology or politics. It is apolitical. I intend this to be a human story, showing viewers facts, nothing less and nothing more," director Min Baek-doo told The Korea Herald.

The film was co-produced by Ahn, Min, and 30 other donors and investors with a budget of about 450 million won ($399,726). Shot in February 2012, it was screened at the United Nations offices in Geneva and the US Congress.

A 2012 UN study found 27.9 per cent of North Koreans were chronically malnourished and listed 7.2 per cent of the population in the "severe chronic malnutrition" category.

North Korean law forbids residents from leaving the country without prior permission from the Ministry of State Security, its intelligence agency and secret police. Forays abroad looking for food or medicine are not authorised.

In the past, a small bribe to border guards before crossing the Yalu used to work. But now, explains Ahn, inflation has caught up.

"In addition to stricter laws against border breaches, Kim Jong-un has created a clever scheme of awarding border guards more state medals. The more border-crossers they kill, the more medals. In the past, North Korean soldiers used to take in a lot of bribes to save money and would spare the refugees. Now, they have a stronger incentive to kill."

Hunger and the difficulty of gaining daily necessities are enough to compel some North Koreans to risk everything nevertheless.

Perhaps death is a polite coup-de-grace. If refugees are taken alive at the border, or caught by Chinese officials, they are sent to the North's secret police, whose agents torture their victims.

"Many of the movie's donors and investors wanted as many people as possible to watch this film. So, to keep the movie rating at PG-15, we had to omit the more gruesome torture scenes. In real life, arrested female refugees are stripped naked and beaten until their vaginas or anuses bleed out foreign cash or other hidden materials of value", said Min.

It doesn't matter if the victims die or if they're not hiding anything in the first place. Because they're traitors in the eyes of the North's legal system anyways, he adds.

"Lawmakers here in Seoul must pass the North Korean human rights legislation that's been stalled since its initial proposal at the National Assembly in 2005." Legislation means more funding to North Korean refugee aid programs, such as awareness campaigns, rescue operations in China, and humanitarian missions.

The US and Japan passed similar North Korea human rights legislations in 2004 and 2006 respectively.